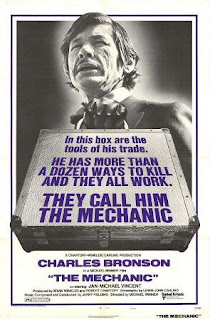 I have to admit, part of me has always wanted to be more feared than admired.

Not that I'm loved or admired by too many people outside of my own family (even then, I wouldn't to put that to a vote), but I'm 100% certain I'm not feared by anybody, for two reasons:

Reason #1:  I've never been physically intimidating, despite superficial efforts to look badass in my younger ‘metal’ days by wearing all black and perpetually scowling. In reality, I’ve lost both fights I’ve ever been goaded to engage in and generally spent most of my life avoiding any confrontation which might lead to another one. I don’t consider myself a pussy or anything. I simply have a realistic assessment of my meager fighting skills.

Reason #2: I’m a middle school English teacher, a job that isn’t exactly conducive to demonstrating one’s badassery. Part of that is due to the touchy-feely environment expected in the modern classroom, where all kids are special snowflakes, even the assholes. And no matter what they (or their parents) say to you, it’s your job to grab some wall and take their verbal violations like fresh fish in prison. To do otherwise means you have failed to make a personal connection. Don’t get me wrong...there have been numerous ‘troubled’ kids over the years I’ve been able to establish wonderful relationships with. While I’m proud of this, it takes a lot more work and patience than most people in other professions would ever tolerate without resorting to kicking the living shit out of them.

But if I could look, talk and act like Charles Bronson, the two reasons listed above would be complete non-issues because he’s one of the most imposing dudes ever to stalk the silver screen. Just look-up 'scary motherfucker' in the Oxford Dictionary and you'll see this face:

If that guy stood at the head of a classroom of seventh graders, none of them would give him any shit because they'd be busy pissing themselves. That guy wouldn't need to raise his voice throughout the entire school year. That guy could assign a 5,000 word essay every single day and kids would simply be grateful he didn't thrust a mechanical pencil in their necks as he passed by. And I'll bet ol' Bronson never had to put up with road rage from some aggressive, testosterone-fueled asshat behind the wheel of an oversized half-ton pick-up, because all Chuck would have to do is lay that classic deadly stare on them, and said-asshat's supposed balls would shrink up into his chest cavity.

That's because Bronson always looked like he'd kill you at the slightest provocation, without warning or a hint of anger. In fact, his expression and voice inflection seldom changed throughout his entire five decade career of westerns, war epics and action movies. But ironically, he was mostly cast as a good guy. The closest he came to being true a villain was in 1972's The Mechanic. Even then, Chuck's the hero by default because every other character is even more unsavory.

In The Mechanic, Bronson plays Arthur Bishop, a hitman whose meticulous methods of dealing death are almost artistic in their complexity. He prefers to work alone, but after meeting Steve (Jan Michael Vincent), the young, brash son of a mafia kingpin, Bishop decides to make him an apprentice. This doesn't sit well with Bishop's employers, who don't appreciate someone new being brought into the fold without permission. This eventually leads to the organization putting a contract out on Bishop, hiring Steve himself to do the job. That's the plot in a nutshell, with a satisfying twist ending which borders on genius.

Though Bronson's probably best-known for his portrayal of vigilante Paul Kersey in Death Wish (and it's god-awful sequels), The Mechanic actually makes the best use of his image: the emotionless stare, monotone voice and sand-blasted face. You never knew exactly what was going on behind those eyes, but were pretty sure things wouldn't likely end well for those who crossed him. Chuck never needed Sly Stallone's physique, Bruce Willis' wisecracks or Jason Statham's moves. Not with that face.

Case-in-point...The Mechanic was remade in 2011 with Statham in the title role. As remakes go, the movie isn't terrible (though completely unnecessary) and Statham engages in his usual quota of ass kicking. But still, compare these two gentlemen:

Even though I hold Statham in the highest respect as a modern day purveyor of manly mayhem, he still looks like an insurance salesman. On the other hand, the only thing Bronson's face insures is a violent death, without even uttering a word (which he doesn't do for the first 20 minutes of The Mechanic, one of the most underrated opening sequences of all time).

That's how I'd like to be feared, with a hardened, granite, weatherbeaten face which tells everyone all they need to know...I'm not a guy to be fucked with. Sure, as a teacher, it might lead to some uncomfortable encounters with parents on conference night, but the discomfort would be all theirs as I presented their child's grades without offering a single word. My cold, hard expression would speak volumes, with no room for rebuttal.