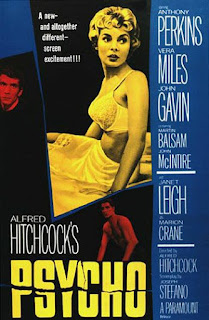 Why, yes, this is yet-another essay about Psycho.

And yes, I’m well aware that any serious cinephile has undoubtedly read countless other essays, analyses, lists and reviews (by more renowned writers than myself) extolling its virtues as Alfred Hitchcock’s crowning achievement, a perfect masterpiece of suspense and technical skill. If not one of the greatest films of all time, Psycho is certainly one of the greatest horror movies, perhaps only rivaled by The Exorcist in terms of influence on the genre.

So I won’t bore you with more heaps of praise you've heard before. Hell, even those who never actually sat down and watched Psycho are at-least familiar with the infamous shower scene. It’s arguably the most imitated and parodied death in movie history.

While it may be considered somewhat blasphemous, I still feel the need to call a wee bit of bullshit on this classic movie, the shower scene in particular. Far be it from me to criticize the master, since I’ll always hold Hitchcock in the highest respect as one of the greatest directors of all time. But after seeing this movie over a dozen times over the years, I find myself wondering if Hitch himself ever actually took a shower.

At this point, it might help to understand my eccentricities. I’ve been a film fanatic as far back as I can remember, an interest which I suppose borders on obsessive. I’ve watched countless movies multiple times (in the case of Jaws, probably over a hundred, since it’s the greatest movie ever made). That being said, sometimes I become a bit too analytical for my own good, obsessing over details the average filmgoer would never think about. No, I don’t sit down to look for mistakes or inconsistencies, nor do I set-out to debunk a movie’s logic or plausibility. If that were the case, Star Wars would be the worst offender of all time. But the more I watch a particular film, the harder it sometimes gets to overlook tiny details.

For example, I love 1973’s sci-fi classic, Westworld, which depicts an adult amusement park where lifelike androids cater to guests’ every whim, until a computer virus turns them homicidal. But the more I watched it, rather than question why these machines would be lethally armed to begin with, I began to wonder whose job it was to actually wipe all the spooge out of the female robots that male tourists are constantly fucking all day. Yeah, I know it’s a minor detail having nothing to do with the story, but it’s become a nagging question which torments me.

Similarly, the shower scene in Psycho leaves me with yet-another vexing problem...

I would never presume to critique the death scene itself. Even today, it’s still scary and you’d be hard-pressed to recall an onscreen murder so equally artistic and unnerving. However, the shower sequence is chilling in more ways than one, hence my problem. After settling into her room at the Bates Motel, Marion Crane (Janet Leigh) decides to shower before turning in for the night. She undresses - with ol’ Norm watching, of course - ventures into the bathroom, steps into the tub, pulls the curtain closed and then turns the water on.

Unless your house is equipped with a nuclear-powered microwave water heater, what first-spews from any spigot is downright scrotum-shrinking. Maybe I’m being presumptuous, but don’t most of us let the water run for a few seconds, so when we finally step in we don’t feel like pledges in the Polar Bear Club? I’m pretty sure almost nobody jumps into a shower until that pulsating water is nice and toasty.

Yet Marion simply steps in and blasts that shit right into her face without so much as a flinch, let-alone the breathless “fu-fu-fuc-FUCK!” most of us would manage to wheeze as we pinned ourselves to the shower wall in order to escape the sudden arctic torrent.

Again, who does that? Nobody fucking does, especially at a hotel, arguably the only time you’re encouraged to waste all the water you want. As a homeowner whose blood vessels burst each month the water bill arrives, I’ve tried real hard to reign-in both of my daughters’ penchant for basking under the showerhead for 20 minutes every morning just to wake up. But even as much as I hate paying that bill, I still make sure my own showers are good & hot before stepping in. It’s worth a few extra bucks a month just to avoid having my frozen balls suck themselves into my chest cavity.

But I digress...this is just nitpicking, the ramblings of a guy who’s probably seen this movie one too many times. Psycho remains one of the all-time greats, undeserving of such anal-retentive scrutiny. Still, I’ll bet even the staunchest Hitchcock fan will think about this single implausible moment the next time they watch it. Sorry ‘bout that.
Posted by D.M. Anderson at 10:57 PM