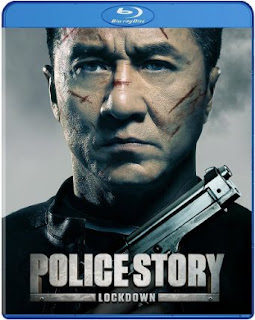 Maybe it’s because I’d grown accustomed to the ‘funny’ Jackie Chan that Police Story: Lockdown was sort-of jarring. While I admittedly haven’t seen everything he ever made, even his hard-hitting Hong Kong action films always included healthy amounts of humor among the mayhem and jaw-dropping stunts. Though touted as the fifth entry in Chan’s long running Police Story franchise, this is actually a stand-alone film with no relation to any previous chapter. And aside from the blooper reel during the end credits, its tone is 100% serious.

Chan plays Zhong, a battle-weary veteran cop who agrees to meet with his estranged daughter at a local nightclub run by her boyfriend, Wu Jiang (Liu Ye). But Jiang has other intentions, taking Zhong and several others hostage. After locking down the club with fortified doors and windows, Jiang’s only demand is to meet Wei, whose been incarcerated for a bungled robbery attempt. Zhong tries to gain Jiang’s trust by serving as a moderator/negotiator during the stand-off. As the story continues to unfold, we learn Jiang’s true motivations, and these particular hostages were lured to his nightclub for a specific reason...they all have some connection to the aforementioned robbery.


Storywise, there’s a lot to like here. Chan is solid as usual, displaying a vulnerability which renders him pretty likable even when engaging in numerous fights and stunts. Ye is an interesting, dynamic villain, mainly because he’s never completely hateful. In fact, once the entire plot is revealed, we sort-of empathize with him.

However, the action only moves in fits and starts. We still get to see Chan engaging in what he does best, but those scenes are few and far between, and never as rousing or jaw-dropping as previous films in the series. Still, for someone getting on in years, Chan shows he still has a lot left in his tank. Additionally, much of the dialogue is truly awful. I’m not sure whether that’s due to the actual script or something getting lost in translation with the subtitles, but many of these folks utter some phenomenally stupid shit throughout the film.

While still pretty fun, Police Story: Lockdown is one of the lesser entries in this long-running franchise. It’s great to see Chan has still got what it takes to be a formidable action hero, but this film is way too serious and pales in comparison to some of the Hong Kong classics of his glory days.