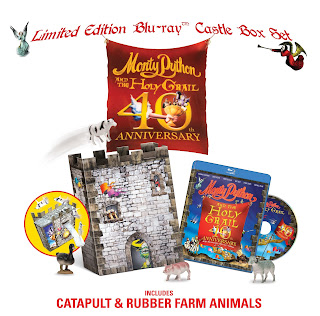 CULVER CITY, Calif. (August 17, 2015) –Sony Pictures Home Entertainment celebrates the 20th Century’s most brilliant and outrageous comedy troupe and their essential comedy classic with the MONTY PYTHON AND THE HOLY GRAIL: 40th ANNIVERSARY EDITION, available as a Limited Edition Gift Set and in standard Blu-Ray packaging on Oct. 27.  Both editions of the comic masterpiece include all-new artwork from Terry Gilliam and the all-new 30-minute “Monty Python and the Holy Grail at the 2015 Tribeca Film Festival,” a Q&A with Terry Gilliam, Terry Jones, Michael Palin, John Cleese and Eric Idle, hosted by John Oliver and recorded live at the Beacon Theatre in New York City.
Posted by D.M. Anderson at 1:18 PM