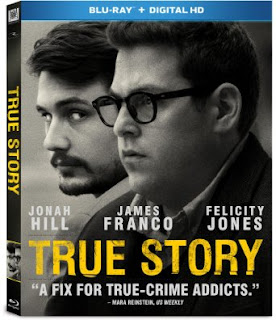 Being from the Pacific Northwest, I remember when Christian Longo was all over the local news. To be honest, I stopped following the story after the initial details were revealed, that Longo murdered his entire family and dumped their bodies in various parts of a coastal waterway (the youngest daughter stuffed into a suitcase) before feeling to Mexico. Being a family man myself, that stuff hits me too hard, so whenever the news offered updates, I usually changed the channel because you don't see that shit on ESPN.

So I didn't get too many details, such as Longo using the alias of Mike Finkel while on-the-run. At the time, the real Finkel was a celebrated journalist for the New York Times, recently fired for fudging the facts on a story. Afterwards, he couldn't find publications interested in working with him until he learned of Longo using Finkel's name and credentials. This led to a meeting between the two after Longo was caught and extradited back to Oregon to stand trail. Since Longo admired Finkel's writing and Finkel was desperate for a story that would put him back on top, they developed a relationship that would last throughout the trial, along with an agreement that Finkel had exclusive rights to Longo's personal account of what happened. This ultimately resulted in True Story, the book on which this film is based.

The film is a character study of two different people clearly using each other for their own personal agendas, though it's ultimately about Finkel (Jonah Hill). He believes the story would be a great subject for a book and sells his idea to a publisher before the trail is even over, resulting in complications after Longo enters a pre-trial plea which threatens to unravel everything Finkel has worked for.


Those expecting a thriller akin to The Silence of the Lambs (an obvious inspiration) will be disappointed, though the flashback scenes depicting the murders, while tastefully presented, are truly disturbing. A majority of the film focuses on Finkel's decisions and conflicts while covering the story, as well as how it affects his personal relationship with Jill (Felicity Jones, who's good, but underused). As such, True Story is only partially successful. The basic premise is morbidly fascinating, but the film drags at times and the conversations between Finkel & Longo are only sporadically compelling. Ultimately, we don't learn much about any epiphanies Finkel may have had while writing his book, despite a final scene depicting him as a changed man.

But the performances save the day, especially Hill, once-again demonstrating he’s more than an affable buffoon and arguably the sole reason we can identify with Finkel at all. As Longo, James Franco is also good and suitably low-key, though he’s not given nearly as much to work with. While the script occasionally attempts to make his character somewhat dynamic (like Hannibal Lector), we never assume he’s anything but an irredeemable psychopath.

True Story is good for what it is, an earnest, well-acted drama based on a sensational story. It’s just too bad the script itself tends to be meandering and occasionally one-dimensional, shedding little light on the individuals involved with the actual incident.

NOT BAD...THE PERFORMANCES MAKE THE MOVIE