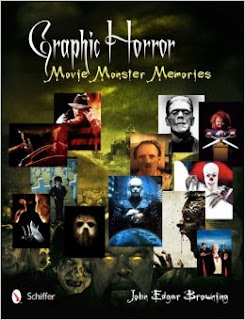 This coffee table book is a decade-by-decade collection of various movie posters from around the world, along with occasional promotional stills. From undisputed classics to schlocky cinema to cult treasures and everything in between, there's a lot to admire from a pictorial standpoint.

The text leaves a lot to be desired, however, consisting of numerous personal comments and anecdotes from a variety of writers, most which are more about the movies themselves than the actual artwork (and nothing you haven‘t heard before). Considering it’s an art-based book and some of these posters have become iconic, it would have been more interesting to learn more about those responsible for their creation. Some of the editing is also occasionally boneheaded, such as the entry for Exorcist II: The Heretic, where it appears the author is claiming this putrid sequel “routinely makes people’s scariest-of-all-time lists,” but the write-up itself is obviously intended to accompany the poster for Suspiria on the bottom half of the same page.

Still, this is a colorful, attractive volume with hundreds of pieces of legendary movie-related artwork right up through 2010. It’ll have a lot of nostalgic value for cinephiles who grew up during one of these eras, and serve as a nifty visual history lesson for younger fans. Just ignore the text, since most of it is obviously subjective and serves no real contextual insight.