THE COLLECTED WORKS OF HAYAO MIYAZAKI Available on Blu-ray via Amazon.com November 17 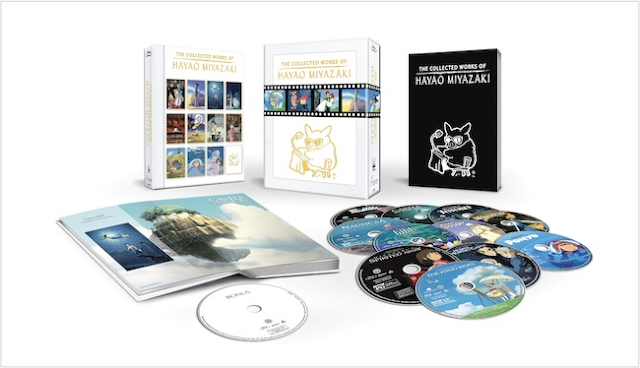 Disney presents for the first time  The Collected Works Of Hayao Miyazaki, including all 11 of Miyazaki’s feature-length masterpieces in one spectacular 12-disc collection  available on Blu-ray™ Exclusively via Amazon.com on November 17, 2015. Experience the majestic works of one of the most celebrated filmmakers in the history of animated cinema. Hayao Miyazaki weaves his unique style of artistry and epic adventure into astonishing tales of triumph, bursting with imagination and wonder.


Bonus Features:             “Yuki no Taiyo” (Yuki’s Sun) - A 1972 TV pilot based on an original manga by Tetsuya Chiba, directed by Hayao Miyazaki who was also in charge of storyboards and key animation.

Booklet:                           A collector’s edition book featuring “The Great Dichotomy: Looking at the Works of Hayao Miyazaki” by Tomohiro Machiyama, which explores the themes and techniques of this revered Japanese filmmaker, and selected text from Hayao Miyazaki’s initial notes and creative proposals for the production of each film