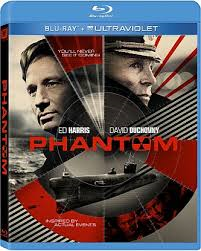 I love submarine movies, maybe because such vessels are inherently scary to me. Of all the ways to die in service of one's country, perishing onboard a tin can under hundreds of feet of ocean seems like the most horrible. Even a near-hit by an enemy torpedo means you're pretty-much toast. You're trapped in extremely close quarters with almost zero chance of being rescued; if the hull pressure doesn't crush you like a grape, then the lack of breathable air eventually will. It's that lingering air of oppressive doom which makes submarine thrillers intriguing. That awful feeling is what I liked about Phantom, an unjustly-ignored movie which deserves a second look on Blu-Ray.

Storywise, Phantom is sort of a cross between The Hunt for Red October and Crimson Tide (two of the best submarine thrillers in recent memory). Ed Harris plays a disgraced Soviet captain who's offered one last command before being forced to retire, to take an aging sub out to test a new device (dubbed Phantom) which makes the vessel appear to enemy sonar as a harmless fishing boat. In charge of this new weapon is an obsessive KGB agent (David Duchovny), who may or may not be acting under orders as he uses Phantom to try and start a war between the U.S. and China. This leads to some suspenseful conflict as the two fight for control of the sub. 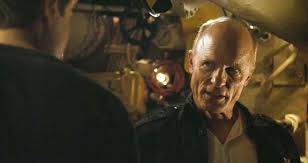 While Phantom is not in the same league as Red October or Crimson Tide, one thing it does better than any film since Das Boot is make submarine life look truly shitty. This isn't a glamorous 'Hollywood' sub with shiny chrome and plenty of room for the camera crew. We really feel like we're stuck deep underwater in claustrophobically-cramped confines.

Overall, the cast is impressive, especially Harris (as usual), who effectively conveys the quiet desperation of his character. The story itself is intriguing enough to maintain interest, though I do take some issue with the ending, even though the prologue renders it inevitable. How writer/director Todd Robinson chooses to cap things off seems anti-climactic and out-of-place in a movie like this.

Still, Phantom deserves a bigger audience than it got in theaters (it came-and-went in the blink of an eye). This moderately-budgeted film won't make anyone forget such classics as Run Silent Run Deep, Crimson Tide or The Hunt for Red October, but it's a tidy little thriller in its own right, definitely worth checking out on home video.
FKMG RATING: