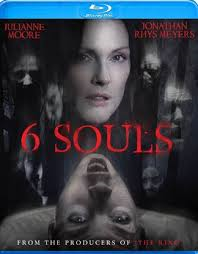 This supernatural horror film is cut from the same cloth as The Ring and similar Japanese-inspired ghost stories, but with middling results. Part of the reason is this once-intriguing subgenre has probably run its course and 6 Souls is too little, too late, offering nothing we haven't seen before. Had this film been made ten years ago, it may have seemed a little more fresh.

However, a horror film doesn't necessarily need to be original to be effective, if done with a lot of flair (Insidious is a great example). This is where 6 Souls really fails. It isn't badly made or anything, but there's nothing distinctive about it, either.

Julianne Moore plays Cara Harding, a criminal psychologist who's become hardened and cynical since the murder of her husband. When her father, Jeffrey DeMunn, introduces her to a schizophrenic new patient, Adam (Jonathan Rhys Meyers), she initially balks at any idea of multiple-personality disorder. But Adam isn't actually nuts...the alternate personalities he assumes are the souls of selected people who have died horribly over the course of decades. Upon further investigation, Cara learns about the victims and their history, leading her to a small mystical cult whose origins go back to the early 20th Century, and whose actions may have triggered the inexplicable events she's witnessing now, some of which threaten her own family. Ultimately, it turns out Adam is something much worse then she ever imagined.

The film is atmospheric and the performances are good (especially Moore and Rhys Meyers), two elements which certainly hold our interest. But the story itself is little more than a checklist of genre conventions (ambiguous symbolism, personal threat to the protagonist's family, occasional jump-scares, etc) with an unsatisfying climax and resolution which results in a feeling of "So what?". Then there's the one gigantic plot hole I was unable to get over...If Adam is indeed this dangerous, and everyone in the movie knows it, why is he continuously able to wander wherever he wants?

Ultimately, 6 Souls is the kind of film that might appeal to fans of supernatural horror, but one they'll likely forget about soon after. It isn't awful (it probably would have been more fun if it was). It's just nothing special. Other films have covered the same ground, only better.