PORKY'S: A Gauge of Intelligence 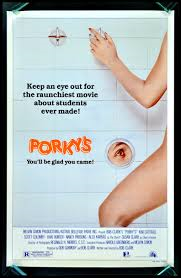 Porky's is a leering, voyeuristic and utterly stupid sex comedy that was hugely popular during my senior year of high school. I didn‘t see it on its opening weekend, but I remember sitting in class near fellow students (all guys), sporting shit-eating grins, stupidly snickering as they talked about how awesome it was. They made it sound like the funniest movie since Animal House, a film I still consider the greatest comedy ever made, so I was intrigued enough to check it out the following weekend. However, I made the mistake of bringing a date.

Although it could never have existed without Animal House, Porky’s is not even in the same league. Sure, Animal House is raunchy, but also witty, clever, satiric and loaded with infinitely-quotable dialogue. Porky’s is simply crude and misogynistic, appealing to the dumbest boobs in the audience who think anything related to genitals is inherently funny. I was embarrassed for both me & my date, and truly could not fathom why everyone I knew thought it was so amusing.


Of course, nobody should be judged on their personal tastes in entertainment, but sometimes I can’t help it. I enjoy the occasional dumbass flick as well, but one difference is I like those movies because they're shitty and would never confuse them for great films. Today, whenever someone seriously argues the merits of a piece of celluloid shit like Eddie Murphy's Norbit, my first urge is to shove a DVD copy of 48Hrs up their ass.

Porky’s was the first movie which made me question other people’s taste and intelligence. I immediately tended to assume any classmate who loved it might be an idiot. Like a lot of movies from the 1980s, Porky’s has not aged well. It’s even stupider now than it was three decades ago, so I’d be willing to bet anyone who still enjoys it are either former jocks whose high school years were the best of their lives, or is someone whose cranial development ceased at age 17 (or, most likely, both).
Posted by D.M. Anderson at 4:42 PM