FALLING DOWN: A Missed Opportunity 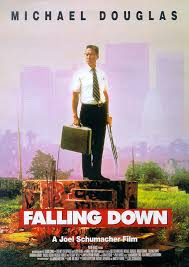 Most of us are shocked when someone suddenly snaps and goes ballistic in public. We're outwardly stunned because we're more-or-less normal. When we see someone venting their rage in public, we stop and gawk at the spectacle, mainly because we don't see this shit every day. We pass judgment on them without knowing what triggered their tirade in the first place. But the thing is, unless that individual is already as crazy as a shithouse rat, something has to ignite such rage...and it's almost always other people.

I think people are generally good-hearted by-nature. I don't believe too many of them are going out of their way to be assholes. But I do believe most are often clueless to how even their smallest actions affect those around them. They don't consider others waiting in the check-out line behind them as they pull out an overstuffed envelope of coupons. They never worry about the driver they just cut off without signaling because they're busy texting. When they do a half-assed job at work, they seldom stop to think of who has to pick up the slack.

Why? Because we don't take time to inform people when they’re being jerks. Most of us bottle-up our disapproval, stewing in silence as these self-centered douches inadvertently make life more difficult (if even for a moment). But that doesn't mean we never entertain the thought of grabbing Coupon Lady's envelope and hurling it across the store, or owning a car armed with machine-gun turrets to take out the cell-phone shitstain driving 10 miles under the speed limit. I can’t count how many times I’ve wished my car was equipped with a giant spatula which could slide under the idiot ahead and flip his car into oblivion behind me. While I do not condone road rage, I sure as hell understand it. 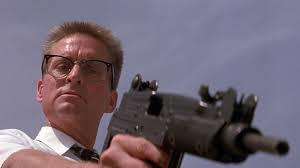 Michael Douglas confronts the inidividual who gave him this haircut.

But confrontation, especially with strangers, is hard. Sure, convenience stores need to know charging a buck to use a credit card is a fucked-up policy, but most of us bite the bullet and grudgingly comply, because all making a scene would accomplish is making us look like even bigger assholes than those we're pissed at. Besides, it's probably not the clerk's fault anyway. We're so conditioned to suffer in silence that when we go to McDonald's, even though we know damn well our Quarter Pounder won't look even remotely like the picture on the menu, most of us will accept what we're handed...probably because we aren't clutching an Uzi while we order.

But wouldn't it be great to give-in to our Id on occasion, to be brave enough to say or do something extreme at just the right moment which makes those around us cheer? Hell yeah, it would, which is what I thought Falling Down would be, the ultimate revenge fantasy for everyone lacking the balls to call bullshit on the people who seemingly exist just to make life harder. Trailers made it look like a black comedy, a disreputable guilty pleasure where we root for William "D-Fens" Foster (Michael Douglas), a disgruntled everyman who's simply had enough and is willing to do something about it, sometimes violently. For those of us too inhibited to act on our impulses, yet supremely frustrated by the world around us, who wouldn't love a movie like this? I remember thinking Falling Down just had to be the singular voice of my overall dissatisfaction with my life at the time.

But Falling Down is not the cathartic, audience-rousing guilty pleasure it should have been. Sure, there are some terrific moments of dark humor, such as the fast food scene were D-Fens uses an Uzi to get his order right. But most of these confrontations are defused by the filmmakers' desire to make us aware D-Fens is already psychologically unstable, not the disgruntled everyman acting on behalf of the masses. Even though his actions are something we've all entertained at one point or another, we're ultimately made to feel guilty for having such thoughts because that would mean we’re as maladjusted as D-Fens.

A perfect example is an early scene where D-Fens confronts a Korean convenience store owner over the prices of his inventory, using a baseball bat to trash the place. That alone would have been a terrifically cathartic release for the audience. After all, who hasn't gone into 7-Eleven and balked at the price of a soda? Instead, D-Fens verbally rips into him for being an ungrateful Korean, rendering his legitimate argument moot because it's now a racist tirade. This single scene made Falling Down controversial at the time, but for all the wrong reasons. A movie like this should be controversial for its supposed solution to society's ills, not a simple-minded portrayal of a particular race.

Despite its amusing moments, Falling Down is ultimately a simple tragedy of one man's descent into madness, which is too bad. Anyone whose job has become obsolete may initially identify with him, but the more we learn about D-Fens, the less rousing his actions are. He's watching the world pass him by and is powerless to do anything about it, but the fact he's crazy from the get-go defuses any true message the movie may have had on the subject. In the long run, his violent rebellion ends up being disturbing.

If D-Fens was initially portrayed as sane, Falling Down could have been the most effectively-nihilistic film of the 90s, an infinitely-quotable cult flick with a truly potent message underlying the fun. Instead, it’s just another guy going crazy. It's still a great movie, easily the best a hack like Joel Schumacher ever attached his name to, just not the one we were expecting in 1993. A shame, really,  because with a bit of tweaking, Falling Down could have been a movie we'd still be talking about to this day.
Posted by D.M. Anderson at 4:35 PM