THE INCREDIBLE SHRINKING MAN: The Dark Side of Cats 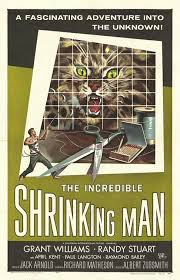 I’ve been around cats my entire life. Growing up, there were always at least two living with us at any given time. We once had as many as five, mainly because my sister kept bringing them home, and we went through at least two bags of kitty litter a week (I know, because guess whose job it was to clean the goddamn box?).

Cats regularly moved in and out of our lives…some died of old age, some were given away because they kept spraying, a few simply decided to leave because they didn't care for the accommodations. And one met an unfortunate end in our washing machine when the dumb little beast climbed inside the second before Mom tossed in a load. It wasn’t until well-into the wash cycle that Mom noticed the thump-thump-thump erupting from the laundry room, a sound you don’t normally associate with a load of underwear. But lost cats would always be replaced by new cats, the same way one replaces a light bulb when the old one burns out.

I carried on the same tradition after I moved out on my own and got married. With the exception of a few short months in my mid-20s when I was living in a college dorm, there’s always been a cat in my house. They’ve come and gone fairly regularly, though our current two, Josey and Stinky, hold the record for the longest tenure in our household of any previous cat (10 years and counting). But I’ve never consciously ventured out to acquire a cat. They simply ended up living with us, often because, like my little sister years ago, my daughters brought them home.

Few people actually buy a cat. Unlike dogs, which require a significant financial investment and personal attention, people give cats away as casually as dumping off clothes at Goodwill. And because cats are the easily the most low-maintenance creatures ever to walk the Earth (show it the litter box once and…BOOM…instantly house-broken), it’s easy to see why lazy people like me are so willing to take them in, and why potential hoarders can amass dozens of them. Not only that, you can leave them alone for days as long as their bowl is full. On paper, they are the ultimate house pet.

But cats have a dark side, which is maybe why so many people profess to hate them. They are moody and unafraid to let you know when they’re mad (sometimes by pissing on something). Unlike dogs, your cat will never return the same level of love you give. Sure, they may like you, but you can’t mistake that affection for love or loyalty. If you were suddenly rendered homeless and forced to stand at a freeway on-ramp for handouts, your dumb dog will faithfully stay by your side…your cat will take off faster than a trophy wife whose Sugar Daddy just went bankrupt.

Then there’s the more disturbing part of their personalities…the fact that, even though they are domesticated housepets, cats have retained many of the same instincts as their much-larger counterparts in the wild. Since you provide all their nutritional needs, this means when they go outside to hunt, they are doing it for the sheer thrill of the kill.

I once owned a cat named Pony, who used to bring animals home and leave select pieces of them on the porch (always the head, along with an occasional tiny pile of entrails). Ask any cat lover and they’ll joyously claim your pet is simply showing their love for you with a gift. I’ve also read conflicting theories which claim cats bring home dead shit because they think you are too stupid to feed yourself. Whatever the motive, the fact Pony repeatedly chose to leave only the head was as disturbing as learning your quiet neighbor is a serial killer.

Dogs don’t have a dark side. Dogs wear their hearts on their sleeves 24/7. They are blindly loyal, even if you're the biggest dickhead to ever walk the planet. If you ever wanted to know what it was like being one of The Beatles, simply get yourself a few dozen dogs, spend a few days paying attention to them, then leave the house for a few hours. Upon your return, you’ll know exactly what Paul McCartney endured at the height of Beatlemania. One of the reasons I love my dog so much is because, in his eyes, I’m a rock star.

I love my cats too, but I’m realistic about our relationship. I know I’m not the most important thing in their lives…they are. To them, I’m not-so-much a companion as a commodity. If someone were to break into my house and attack my family, I’m sure my dog would defend us to the death. My cats would scamper to safety because we aren’t worth dying for. I don’t hold this against them. It’s just how they’re wired. Most of us are wired the same way. If you were being carjacked at gunpoint, would you risk your very life to defend your vehicle (even if you valued it above everything else you owned), or would you step aside and let them have it in order to breathe another day?

A cat’s loyalty has its limits, especially when it comes to giving-in to the animal side we’ve mostly bred out of dogs. The instinct to bury their shit, save their own ass or kill anything small is simply part of their DNA and can't be overwritten. If I suddenly woke up three inches tall, I’m positive one of my cats would forego any feelings of affection and see me as a plaything to be taunted, batted around and slowly killed for their own amusement. Like the hapless rodents unfortunate enough to venture onto our property, I can imagine my bloody carcass, appendages twisted in impossible directions, lying dead on the patio while Josey or Stinky lazed nearby, purring contently after another sporting kill. Sure, they liked me once, but wasn’t my agonizing death a shitload of fun?

This is why 1957’s The Incredible Shrinking Man is arguably the most realistic depiction of the common housecat ever presented in cinema. Movie history is rife with iconic cats. There’s Art Carney’s loving companion in Harry and Tonto, and Blofeld’s symbol of pure evil in early Bond films, not to mention the douchebag cat in Alien, who idly watches as the title creature rips-apart a crew member who was trying to save his fuzzy ass. And once you throw out every unrealistic Disney depiction of our furry friends, you’re left with one film which presents a cat simply acting like a cat.

The Incredible Shrinking Man was the first movie I remember scaring the hell out of me, mainly for the scene where our hero battles a spider. Spiders are scary because…well, they’re spiders. Bugs never bothered me, but even today, add two legs & body hair and I’m ready to crap myself. As a child, watching this scene one Saturday afternoon on my parents’ black and white bedroom TV was nothing less than nightmare fuel.

Anyone watching the movie today, even with the dated special effects, will still find a lot to love, which is probably why it was named to the National Film Registry in 2009 as being “culturally, historically and aesthetically” significant. Even now, it’s an incredibly smart and introspective movie with a script by Richard Matheson (RIP), adapted from his own story. Considering it’s over fifty years old and hailing from a genre that was never monumentally respected, The Incredible Shrinking Man is an under-appreciated sci-fi gem.

But what no one seems to mention in their praise is the film’s incredibly accurate depiction of cats. After all, the main character (Grant Williams) is forced to face-off with same animal he once scratched behind the ears. Sure, the cat is suddenly a villain, but only because he’s behaving like all cats do when confronting a smaller & weaker creature.

It makes me wonder which would be worse, death by an arrant arachnid or death by a cute critter with whom I once shared my pillow.

Watching the movie today, I find myself wondering if my own cats, Josey or Stinky, would so-cruelly toy with me if I were suddenly that small, even though I’m the sole reason they have food & shelter. I’m sad to say the answer is yes. Sure, they like me, but they’d probably like me more (and for different reasons) if I were a fraction of their size.
Posted by D.M. Anderson at 4:19 PM