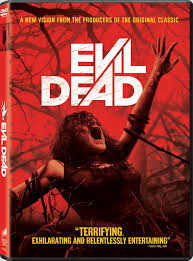 Fede Alvarez’ Evil Dead joins a very short list of horror remakes that manage to top the original in every way. Others on this list include The Thing, The Fly, The Blob and Dawn of the Dead (I probably just angered a lot of obsessive zombie fans by including that last title, but as much as I admire George Romero, I think Dawn has aged worse than all his others).

I guess I should qualify my initial statement by admitting I never cared for Sam Raimi’s original film. I admire what he and his team were able to creatively accomplish with the tiniest of budgets, and while that film justifiably put both Raimi and Bruce Campbell on the map, it’s still a shoddy & amateurish piece of work, with a godawful screenplay and atrocious performances. I may be presumptuous, but I think Raimi & Campbell’s well-earned reputations stem more from the bigger-budgeted splatstick sequels (Evil Dead 2 and Army of Darkness). These two films are awesomely-comedic and over-the-top, with scenery-chewing Campbell spouting classic dialogue that’s still quoted today among horror fans. Hence, I think many of us tend to forget the tone of the original Evil Dead was gloomy & serious.

Director/co-writer Alvarez keeps things fairly morose for this remake as well, returning the series to its roots (the only laugh to be found is after the end credits, which I strongly urge every Evil Dead fan to wait for). The film itself plays like the kind of movie Raimi would have made back in 1981 if he had the financial resources of a major studio at his disposal. Alvarez wisely stays mostly-faithful to the original story, and pays homage to Raimi by using many of the same camera tricks during some scenes. But at the same time, the key changes in both the story and how it’s presented allow Alvarez to put his own unique spin on everything, much like Zack Snyder did with Dawn of the Dead.

Yeah, the plot’s the same…several twenty-somethings venture to a cabin in the woods and one of them comes across the Book of the Dead, which raises unholy demons if one were to foolishly recite the words. Of course, someone does. But what makes this remake work so well is its pacing. After a brief obligatory set-up to introduce these characters, the film charges gung-ho into the bloody horror we actually paid for. Once the mayhem begins, we’re too busy fastening our seatbelts to care about any character’s well-being. That’s Evil Dead’s greatest virtue…it may not always be scary, but it moves at a lightning pace, a virtual symphony truly disturbing, visceral scenes, thrown at us so unrelentingly that it becomes more of a thrill-ride than an actual movie.

Speaking of which, the level of gory, cringe-worthy violence in Evil Dead will have some viewers wondering just what it actually takes to earn an NC-17 rating. The director once claimed cuts were made to earn an R, but as someone who is seldom phased by movie gore, I can’t begin to imagine how sick Alvarez’ original vision must have been.

Onscreen carnage aside, Evil Dead is simply better than the film which inspired it…better direction, better FX, better dialogue & much better performances (even though the characters are still pretty bland).  Fede Alvarez may not be a greater director than Raimi (not yet, anyway), simply having more resources than Raimi did in 1981. Still, he puts his own creative stamp on the material, making him a guy to keep an eye on by horror fans.

Like John Carpenter's The Thing, I think time will be kind to this one.