HELP! and the Magnificent Obsession 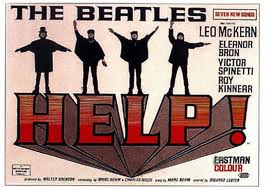 I’m pretty obsessive when it comes to the things I’m into. Some obsessions have come and gone over the years…Hot Wheels, MAD Magazine, Emerson Lake & Palmer, Looney Tunes, fantasy football and the hots for an Asian girl I knew in high school. Other obsessions have been mainstays most of my life (like records, movies, NASCAR, Stephen King & The Beatles). Whether it’s a past or current interest, they all have one thing in common…I give them a level of dedication that might be considered a tad over-the-top. Just ask my wife, who's forced every weekend to make family plans fit around my NASCAR TV schedule.

The first thing I ever became obsessed with was The Beatles. I think I was nine at the time and it was my dad’s fault. Shortly after he married Mom, he gave my sister & I most of his old records he collected during college but no longer listened to. One of those records was The Beatles’ A Hard Day’s Night, which I fell in love with. Until then, music was just something on the radio during long drives to Grandma’s house. But the songs on A Hard Day’s Night found a place inside me I didn’t know existed…where music was more than a background diversion. The songs commanded my attention and shut out everything else. I played that album to death on my tiny phonograph once reserved for Disney storybook records.

For a long time, this record was my only exposure to The Beatles. I had no idea they ever recorded anything else. Then Help! showed up one afternoon on Channel 12, the local independent station which showed reruns of old movies on the weekends. What? The Beatles made a movie? Awesome!

Unlike my little sister, who loved Elvis movies, I never cared for musicals (with rare exceptions, I still don't). But Help! wasn‘t just a musical. It was flat-out funny, loaded with the same irreverent British humor Monty Python later made a career from, and the type of satire, sight gags, puns & one-off lines that eventually made movies like Airplane! something you had to see more than once just to catch everything. The Beatles looked and acted cooler than anyone I’d ever seen on screen, and I was stunned to discover they were British, since they never sang with accents. I suddenly wanted to grow my hair long and speak with an accent, too. My parents nixed the hair thing, but I did develop a pretty decent facsimile of an accent over the years, to the point I once convinced a few gullible girls during college I was English, which somehow made me more attractive.

Then there were the songs in the film, which were even better than those on my lone hand-me-down Beatles record. To this day, “You’re Going to Lose That Girl” is one of my favorite songs of all time. I’d heard “Help” and “Ticket to Ride” on the radio before, but until this movie I had no idea they were Beatles songs. In fact, this particular revelation occured tenfold after my folks gave me The Beatles 1962-1966 and The Beatles 1967-1970 for Christmas one year. These were both double albums loaded with their biggest hits, most of which I didn’t even know were Beatles tracks. I listened to those two albums incessantly, pouring over every lyric, every riff, every solo. These records also included an insert showing the band’s entire discography, singles and albums. This was another stunner…The Beatles had a shitload of records I never even knew existed.

I’d only scratched the surface, a realization compounded when, one weekend, a local Portland AM radio station played every single Beatles song from A to Z. I couldn’t believe what I’d been missing…”Helter Skelter” was easily the catalyst for my eventual love of heavy metal, “She’s Leaving Home” was the saddest song I’d ever heard, and as for “Revolution #9”…talk about your intriguing WTF moments. 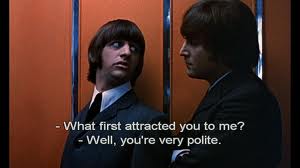 My parents moved to an apartment complex and agreed to be the on-site managers in exchange for reduced rent. I provided cheap labor when it came to property maintenance…if I did a good enough job pulling weeds, they’d buy me an album at the end of the week. I almost always chose Beatles records…The White Album, Help!, Rubber Soul, Revolver, Abbey Road, Sgt. Pepper, etc. I grabbed some of their solo albums too, but they were never as good.

My obsession had me making lists of Beatles songs based on who wrote what, who sang what, shortest songs to longest songs, mellowest songs to most-rocking songs…you name it, I had lists of it, none of which served any purpose whatsoever. I had Beatles posters on my walls, committed song lyrics to memory and scrawled some of my favorite verses on my Pee-Chee at school. In private, I occasionally put a T-shirt on my head to simulate long hair, used my hockey stick as a guitar and pretended to be George Harrison (my personal favorite Beatle) as I rocked-out to “Old Brown Shoe” or “Taxman.” I’d sometimes switch to being Paul so I could release my inner-psycho during “Helter Skelter.” At the height of my obsession, I remember being outraged when my sister expressed interest in buying a Beatles single with her allowance, defending my position as the only Beatle fan allowed in the house.

I think my parents were getting sick of hearing their music booming from my room, not to mention me always talking about them. They often suggested other groups for me to try out, and once tried to force-feed me Chicago as an alternative...but that was like asking Mom to bring home some Chips Ahoy from the grocery store and she returns instead with Fig Newtons. Besides, I did start buying discs by other artists (I loved record collecting at this point) once I'd acquired every album The Beatles had made.

Yep, it’s safe to say I was a Beatlemanic, an expert in everything related to the band, except for one big and embarrassing bit of ignorance…

It was probably around 1974, after listening to Revolver of the 8,000th time, that I wondered out-loud at the dinner table, “How come The Beatles haven’t made any new records? All I see at the music store is the same old stuff.”

“The Beatles broke up a long time ago,” Mom said matter-of-factly.

I’m pretty sure I froze at the table, mid-bite. The Beatles broke up…years ago? But they’re on the radio all the time! Surely you’re wrong, Mom!

She wasn’t wrong, of course. My favorite band had broken up before I even heard of them. All of their albums were new only to me, and Help! was simply another old movie on Channel 12, like those dumb Elvis flicks my sister watched. This was like suddenly learning there was no Santa Claus. For a brief time, I was heartbroken.

By now, I was obsessed with collecting records, and as I grew up, so did my collection. Forced to accept the death of the Fab Four, I moved on to Kiss, Alice Cooper, Queen, Rush and Emerson Lake & Palmer. My obsession with these bands ebbed and flowed, but never with the intensity of my childhood infatuation with The Beatles. Even today, I go through periodic moods when they are the only thing I want to listen to at home or in the car. It’s during these times I also re-read a fat biography I own about them, and re-watch The Beatles Anthology in its entirety.

As for the few movies The Beatles appeared in during their time as a band (only four), I acknowledge the groundbreaking A Hard Day’s Night is arguably their best film. Not only did it introduce the affable charm of The Beatles to most of the world, it was likely the biggest single influence on the birth of MTV. But Help! remains my personal favorite. It was my first real exposure to The Beatles beyond that scratchy old record Dad handed down to me. Watching it now, the songs are still awesome, and I’m still transported back to a time in my childhood when it was all new, and the band had never broken up.
Posted by D.M. Anderson at 7:18 PM