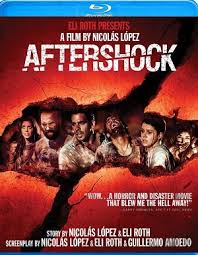 Since Cabin Fever and the first two Hostel films earned Eli Roth a well-deserved reputation as a purveyor of unrelenting, nasty horror, one can’t help but have similar expectations for Aftershock. Although he didn’t direct it, he is prevalent both behind and in-front-of the camera, co-producing, co-writing the screenplay and playing one of its main characters. His stamp is all over it, and even though it is not really a horror film, Aftershock is similarly disturbing, graphic and brutal.

Structurally, the story is similar to Hostel…a small group of beautiful and cocky twenty-somethings are looking for thrills a in an exotic country (in this case, Chile), then we watch them getting shit-faced during the entire first act before something unexpectedly awful happens. In this case, it’s a massive earthquake that devastates the entire city. But that’s not the worst of it. In the aftermath, they face an even worse horror…not only must they try to escape an impending Tsunami, the quake-ravaged streets are filled with criminals taking advantage of the disaster in order to steal, kill and rape. One band of really despicable & murderous thugs has their sights set on our main characters (particularly the women); much of the rest of the film focuses on these characters’ efforts to escape the marauding bandits.

If you think Aftershock sounds more like a disaster epic than a horror film, it‘s understandable. But there’s something more demented and twisted at-work here. This ain’t your granddaddy’s Earthquake or the dozens of made-of-TV disaster flicks which pop-up on the SyFy Channel. The quake is simply a catalyst for the ensuing brutality we witness afterwards, where we watch people die horribly at the hands of others. Like Roth’s Hostel, there are a few truly cringeworthy scenes that’ll make you lose all faith in humanity.

Eli Roth is top-billed and (other than an amusing cameo I wouldn't dream of giving away) the most recognizable member of an ensemble cast, all of whom do decent jobs with their roles. There’s also a surprising amount of character exposition; we develop a quick fondness or dislike for the primary players, important in a film like this, since it follows the Hostel structure so closely…we care about their fates before it unleashes the mayhem which follows. The film’s greatest strength lies in the fact we are never confident about who lives or dies.

For a relatively low budget film, Aftershock is pretty ambitious. A film like this cannot afford the expensive CGI effects of a big-budget blockbuster, so it creatively avoids relying on them in favor of smaller scale practical effects, which do the job nicely. The only obvious CGI moment comes towards the end, a scene which can either be seen as tragic or ironically amusing.

On the downside, for a disaster film, the tone is unrelentingly grim and nihilistic, which will turn off a lot of viewers. Aftershock seems to care less about its primary characters than we do, more concerned with killing them slowly and slipping into exploitation mode when depicting their gruesome deaths. Hence, this movie isn’t what most people would consider fun to watch. It also makes the near-fatal mistake of throwing in a totally unnecessary plot twist late in the game, when it reveals one of the primary characters is not what he seems. His immediate actions after this revelation are totally out of character…stupid and contrived, thrown in for the sake of adding a cheap shock (and one more gruesome death).

Still, aside from the gratuitously-exploitative moments, Aftershock is a darkly-compelling variation on the old disaster movie formula, one which will please Eli Roth fans, even if it doesn’t reach the heights (or depths) of Hostel. We may not feel great afterwards, but we aren’t likely to feel too insulted either.