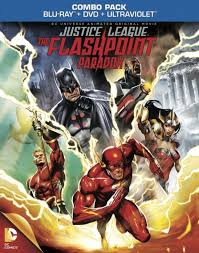 This latest feature-length animated film from DC Comics, based a 2011 crossover series, is nothing if not ambitious. Everything but the kitchen sink is thrown at us…dozens of familiar heroes, villains & secondary characters from the DC universe, lots of action, violence, a surprising amount of bloodshed, alternate timelines and an impending apocalypse. For what’s essentially just a cartoon on par with the stuff which shows up on Cartoon Network, The Flashpoint Paradox is occasionally too ambitious for its own good.

The central character in this one is The Flash, still reeling from the murder of his mother when he was a boy. After thwarting the plans of his nemesis, Thawne (with the help of Justice League pals Batman, Superman, Green Lantern, Aquaman & Wonder Woman), he wakes up in an alternate world where he has no powers, his mom is still alive and the world is on the brink of destruction from a war waged by Wonder Woman’s Amazons and Aquaman’s Atlantis army. Meanwhile, Thomas Wayne (Bruce’s dad) is a much darker and burnt-out Batman who uses guns and drinks a lot, Cyborg is an advisor to the President (who looks and sound a lot like Obama), Superman has been held in government isolation ever since landing on Earth, and Hal Jordan gets killed before he ever gets a chance to become Green Lantern. A slew of other DC characters, good and evil, pop up on both sides of this impending war. It’s up to Flash, Batman and Cyborg to try and stop this war before Flash can use his speedy powers to restore the proper timeline.

That’s a quick & dirty summary of a plot that’s actually a lot more convoluted, mainly because the story shoehorns way-too-many many iconic characters into it. For the novice, it is difficult to keep track of them all, especially since the story seldom slows down long enough to explain their importance in the DC universe. Hence, how much you actually enjoy The Flashpoint Paradox depends largely on how much you already know about everyone who shows up. As someone who doesn’t read these comics and is unfamiliar with their origins and quirks, I was thankful my wife was there to explain just who the hell some of ‘em were.

One conclusion I was able to come up with on my own is The Flash is not a very interesting superhero, at least compared to Batman, Superman or Wonder Woman. I know his particular power is central to the story, but his story is simply not as intriguing as Batman’s. Speaking of which, the film’s best moments come when we learn, in this alternate timeline, it was Bruce Wayne who died and his father was the one who became Batman, who’s even more nihilistic and vengeful.

As with most DC Comics films, its limited-animation style is either wonderfully artistic or monumentally distracting, depending on your tastes. Personally, I prefer images to move more fluidly, but that’s just me. The quality of animation in The Flashpoint Paradox is no better or worse than the countless DC films which proceeded it.

It should also be noted that the movie is really violent. There are a few scenes in which the blood spurts freely and iconic heroes are turned loose to commit the kind of bodily mayhem they never would have been allowed to if it weren’t for this alternate universe storyline. It’s PG-13 rating is well-earned and definitely not for little kids.

While it helps if you are already familiar with most of the myriad characters who show up, this Justice League installment is still entertaining enough to placate novices like me. Yeah, the movie tends to bite off more than it can chew, and assumes everyone in the audience is already up-to-speed on the DC universe, but even as a stand-alone movie, it has just-enough moments (mostly Batman’s) which will make it worth checking out.