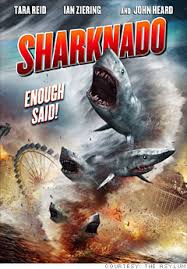 There’s a lot of demented genius behind Sharknado. This SyFy Original/Twitter sensation has viewers either laughing at it or with it. There’s almost zero middle ground, but I think both camps missed the point of the movie. Just like a lot of numbskull conservatives once mistook Springsteen’s “Born in the U.S.A.” for a patriotic anthem, most folks either jeered at Sharknado’s supposed ineptitude, or congratulated themselves on Twitter as being hip to the joke.

But Sharknado is not ineptly made; that would imply its makers didn’t know what the hell they were doing. I think every line of terrible dialogue, laughable visual effect, incredible lapse in logic and blatant continuity error was deliberate and intentional. According to iMDB, Sharknado had a budget of about a million dollars, less than the cost to produce the trailers for most Hollywood films. Hey, if you can’t afford the cost of realism, then you might as well go to the opposite extreme. As such, Sharknado is actually a pretty competent piece of filmmaking, and part of its genius is the fact that everyone laughing at it were suckered into thinking its makers were idiots with serious intentions.

At the other end of the spectrum, because it’s such a deliberate piece of schlock, one might view Sharknado as intentionally-campy, delivered with a knowing wink and a nudge to the ribs. And sure, many scenes are so over-the-top and contrary to all known science that we must conclude it’s all one big joke. During its premiere, the movie was a Twitter sensation, most tweets coming from folks with clever quips to impress their followers. I also think some of them had their comments ready well-in-advance.

But self-congratulatory Tweeters are actually late to the party. Sharknado was produced by The Asylum, a studio that specializes in low-budget knock-offs of popular movies (i.e. Transmorphers, Snakes on a Train & the gloriously cheeky Titanic II), and outrageous flicks like Mega Shark vs. Giant Octopus & Two-Headed Shark Attack, titles probably created before a single word of their screenplays were typed. Fans of wonderful movie cheese have been enjoying these films for years. The folks at The Asylum have filled a much-needed void since Samual Z. Arkoff’s American-International Pictures and Roger Corman’s New World Pictures disappeared…an honest-to-God, proudly-exploitative movie studio who’s production mantra is the same…do it quick, do it cheap and get it out there.

And God bless them. The only thing keeping epics like Sharknado from being perfect date movies are the current lack of suburban drive-ins. Because of this, The Asylum’s brand of low-rent thrills have shown up on SyFy every weekend for years, that prestigious network which once aired a horror movie featuring a psychotic Paul Bunyan. 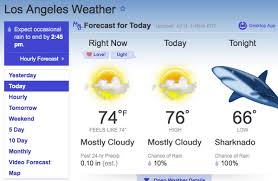 But why have so many people suddenly latched onto Sharknado, of all things? Mega Shark vs. Giant Octopus is just as intentionally crazy (and even features 80's has-been Debbie Gibson, who bumps uglies with an Asian scientist she just met). Some of its popularity obviously stems from the title, embraced by the same internet addicts who briefly attached hipness to bacon, grumpy cats, Llamas with Hats, penguins, Rick Astley & Chuck Norris (see the lovingly-produced graphic to your right as an example). Because most of them tweeted about Sharknado until their thumbs bled, SyFy got higher TV ratings from the rerun than the premiere.

But the genius of Sharknado (and most Asylum films, for that matter) is that it’s made by people who simply don’t give a damn what we think. It’s a throwback to monster movies of the 50s and animal rampage flicks of the 70s, when plausibility sat at the back of the bus. Like the glory days of Arkoff and Corman, it wasn’t made with ‘art’ in-mind; it was made with profit in-mind, and I seriously doubt its producers care one whit if it’s perceived as woefully-inept or brilliantly-campy. Making fun of it says more about you than the movie, as does pretending to be hip to the joke, so the filmmakers themselves are likely having a good chuckle at everyone's expense over this minor media frenzy. Because of this, Sharknado achieves a level of accidental brilliance that even clever commentary by the MST3K guys couldn’t improve upon.

Sharknado’s brief moment in the spotlight will likely go down in pop culture history alongside the Pet Rock and LOL Cats...one of those things so stupid that it has everyone thinking, why didn’t I think of that? As for the film itself, I gotta admit it’s a lot of disreputable fun. If I had paid to see it in a theater, I would have felt less ripped-off I did with Man of Steel.
Posted by D.M. Anderson at 3:18 PM