INDIANA JONES AND THE KINGDOM OF THE CRYSTAL SKULL vs. The KISS Army 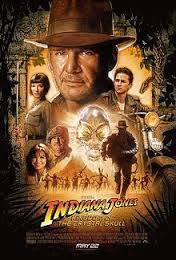 Growing up in the mid-70s, Kiss was the band, probably the biggest cultural phenomenon to assault American kids since The Beatles. For an impressionable 13 year old, they had it all…the look, the sound and thousands of products available for anyone to proudly tell the world they were a Kiss fan. The band also served an important purpose because, for a brief time, they terrified our parents with face paint, leather, fire, blood and songs about partying & getting laid. Kiss was dangerous, a superficial threat twice-removed from the generation of old farts who once proclaimed rock music was destroying America’s youth. Yours truly was a card-carrying member of the Kiss Army, the band's fan club. For only five bucks a year, I got the latest news on all goings-on, posters, photos and an iron-on patch declaring my allegiance. In other words, a lot of useless crap which mostly ended up in a junk drawer.

We inevitably got older, but Kiss didn’t really grow up with us. As our tastes leaned towards more ominous fare like Judas Priest and Van Halen, Kiss seemed childish and quaint, a band destined to be left behind. Actually, a lot of this was Kiss’ fault. In their quest to appeal to everybody, they became a colorful circus act, flirting with disco and pumping out action figures & lunch boxes for eight year olds. Parents were taking their kids to Kiss concerts like they were the Ice Capades. During this time the band “jumped the shark” on numerous occasions…comic books, an awesomely-bad TV movie, a concept album made years after most bands quit doing them, and (worst of all) replacing iconic band members with new faces and make-up. No wonder most fans tossed away their Kiss Army membership cards and moved on.

As a band, Kiss didn’t suddenly become shitty. In fact, one of the albums they made after the hype died (the virtually-ignored Creatures of the Night) is still one of the best heavy metal records hardly anyone’s ever heard. Personally, I still liked Kiss at the time, but because of their lingering image as a kiddie band, being caught listening to them was akin to Mom bursting into your room while you’re trying to rub one out.

Kiss eventually got rid of the make-up and updated their look & sound for the 80s. But with half of the original line-up gone and videos loaded with more Aquanet and spandex than the Surgeon General recommends, they weren’t the same band. Yeah, they started selling records again, but as time went on, a lot of us missed the old Kiss.

They wouldn’t become truly cool again until the 90s, when the original line-up got back together, put back on the make-up, studs & platform boots and hit the road for a reunion tour. Many of their 70s fans were now old enough to bring their kids to the show, which they did in droves. Kiss’ songs & schtick were exactly the same, but damn, it was sure awesome to see them again.

One could say the same about the 19 year interim between the third and fourth Indiana Jones movies. Like longtime Kiss fans enduring the band’s spandex years, the faithful clung to the fleeting hope of a fourth Indiana Jones installment, even though most of us were grudgingly ready to accept Indiana Jones and the Last Crusade as the end of the franchise. Steven Spielberg had gone on to earn respect as a serious director, George Lucas was busy tarnishing his Star Wars legacy and Harrison Ford no longer needed either of them (for awhile, at least). Sure, we were occasionally teased with the prospect of another Indiana Jones film, but few of us realistically expected one.

Like Kiss’ reunion, the official announcement of a fourth Indiana Jones movie was akin to the second coming of Christ among us die hards. We didn’t even care that Harrison Ford had aged a lot since The Last Crusade, just like Kiss fans didn’t care if a geriatric Gene Simmons still sang about banging teenagers. This was Spielberg, Lucas & Ford going old school, returning to a franchise that had a huge impact on all of their careers. It didn’t even really matter whether or not the movie was any good (just like the Kiss ‘reunion’ album, Psycho Circus). We were simply grateful these three managed to get back together at all.

So when Indiana Jones and the Kingdom of the Crystal Skull was finally released in 2008, I was more infatuated with the idea of a fourth movie than the actual final product. As such, I enjoyed it immensely, happy to see Indy again, even during those moments which obviously “jump the shark,” a term used to explain that point when a series or franchise has gone way beyond believable, like when Indy famously locks himself in a refrigerator to survive a nuclear explosion. In fact, the term, “nuking the fridge,” is now nearly as famous. That scene offended a lot of the Indy faithful, though I’m not exactly sure why. There have been plenty of “nuking the fridge” moments throughout the entire series, such as:
Those moments are no-more ridiculous than the fridge scene, yet none of them became dubious pop culture references. Many fans were also offended by the inclusion of aliens in the story, as if this plot were somehow less believable than a face-melting ark, magic crystals or a goblet which renders its drinkers immortal.

Indiana Jones and the Kingdom of the Crystal Skull is not in the same league as Raiders of the Lost Ark. What movie is? But the story is no more outrageous, and the film is far more character-driven than Indiana Jones and the Temple of Doom (the worst of the franchise). And in the 19 years between the third and fourth Indiana Jones movies, when did plausibility become an issue? Aside from some admittedly-bad CGI moments (even though all four movies have some questionable FX), the absence of cast members who are dead or retired, and the presence of Shia LaBouf, isn’t this the best Indiana Jones movie we could have hoped for?

When Kiss went back to simply being the make-up-clad band we loved in the 70s, they didn’t update their sound or look one whit. We were simply glad they were back after such a lengthy absence. Hell, we celebrated their effort to act as though the 80s and 90s never happened. So why all this hatred for Indiana Jones and the Kingdom of the Crystal Skull, arguably guilty of the same crime? This franchise has jumped the shark from the get-go, so why is the inclusion of aliens considered more ridiculous than Indy discovering the dark powers of the Ark of the Covenant?

The only thing this movie is really guilty of is being nostalgic, old school action, released in an era when the genre was being redefined by technology-driven epics like The Matrix and hyper-edited spectacles like the Bourne series. Sure, Shia LaBouf is annoying, but so was Kate Capshaw in Temple of Doom, and she had just as much screen time. Indiana Jones and the Kingdom of the Crystal Skull is still a good movie, definitely an Indiana Jones movie, which also manages to have fun with its main character’s age.

For those who disagree (especially if you haven’t watched the original trilogy in awhile), watch the entire series again, in sequence, ignoring every snarky self-congratulatory comment about the fourth film by internet trolls. I used to urge friends to give Kiss a second chance by listening to Creatures of the Night, and the few that actually did listen to the album agreed it totally kicked-ass.

I think some of you might discover that Kingdom of the Crystal Skull is, at the very least, better than Temple of Doom, the one sequel which tosses aside everything charming about the first film (including Indy's fear of snakes!) so it can bombard you with mindless action and an annoying child-sidekick whose death you’re praying for.

Then again, maybe not. Like my ongoing affection for Kiss, whose old hits I still enjoy, maybe Indy’s time has truly passed. Maybe no nostalgia in the world can negate the overall ill-will toward the fourth film, re-enforced almost daily by snobby fanboys acting like the film took a huge shit on their childhood memories. Maybe I’m one of the few folks left who is able to appreciate the movie for what it is…a well-intentioned throwback to a different era. The movie's no classic, but it's better than no Indy at all.
Posted by D.M. Anderson at 8:18 PM