A CLOCKWORK ORANGE and the MAD Renaissance 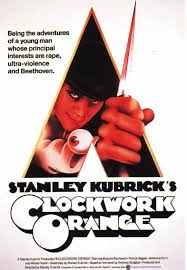 For many of us boys coming-of-age during the mid-seventies, traditional comic books were considered kids’ stuff, so as we hit our early teens, MAD Magazine became sort of a rite of passage into young adulthood. While never as cutting-edge or vicious as National Lampoon, it was just subversive enough that when we grabbed the latest issue off the shelf and threw it into Mom’s shopping cart, part of us felt like we were getting away with something. MAD was more than just a comic book. It was sometimes racy, threw in the occasional mild expletive and simply seemed more adult. Though good-natured and essentially harmless, MAD was a baby step into a more grown-up world. It was also our first introduction to the concept of satire, ridiculing trends, TV, movies, people, pop culture and politics.

As adolescents, we didn't always "get" what they were poking fun at, but that was part of its appeal. MAD was a kids' magazine that never felt like a kids' magazine. Each issue was bookended by satires of popular movies and TV shows of the time, even if said-movies were often those which the average teen reader would not likely be allowed to see. My first introduction to such classics as Death Wish, The Godfather and The French Connection was through MAD Magazine. As an avid monthly reader from age 12 to maybe 17, I sometimes judged the overall importance of a film based on whether or not it was satirized by the artists and writers of MAD.

One such film was A Clockwork Orange, Stanley Kubrick's scathing satire of the state of England at the time, presented as a dystopian view of its future. No parent in their right mind would ever allow their kids to see such a controversial film, but there it was in MAD Magazine, parodied in a 1973 issue as "A Crockwork Lemon" for those same kids to enjoy. I'd be willing to bet 90% of younger readers had never even heard of the movie, but what always made MAD's satires so cool was prior knowledge of a movie wasn't a prerequisite...they were still funny as hell (at least to a 12 year old)...

...maybe even a bit educational, too. MAD skewered the self-important cynicism of A Clockwork Orange, that its gratuitous mayhem, sex and immorality was gift-wrapped in pretentious social commentary, metaphor and symbolism (MAD would later give the same treatment to Rollerball, another violent spectacle oozing with self-importance). It was through MAD Magazine that I first learned some movies were trying to accomplish more than simply telling a story. 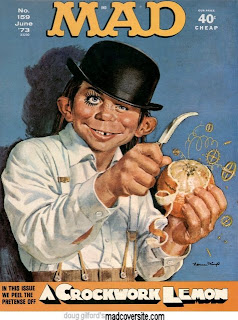 When I finally did see A Clockwork Orange (I think I was 16 or 17), I found myself looking for the imagery and symbolism MAD originally ridiculed, which made the movie more interesting. Despite the film's notorious reputation at the time (it was originally X-rated and banned in a lot of places), it was a bit pretentious and "arty" for a teenager weaned on a steady diet of Alien and Star Wars. If I didn't have the MAD satire as a frame of reference, I doubt I'd have seen it through to the end. It wasn't until much later that I grew to appreciate A Clockwork Orange for the psychotic masterpiece it really is. In my opinion, it is Stanley Kubrick's second greatest film (Dr. Strangelove will always be my personal favorite).

It's a polarizing movie even today, in my own house, no less. My wife considers it pornography and absolutely hates its deceptively misogynistic, light-hearted depiction of rape and degradation of women, which is a totally valid opinion (as I get older, I admit those scenes are tough to sit through). A Clockwork Orange is the only movie she ever seemed upset that I liked. Just the other day, when I found a Blu-Ray copy in a Best Buy budget bin for eight bucks, my wife rolled her eyes and quipped, “You’re buying that movie again?” (though I never actually bought the movie until then...I previously had a VHS copy recorded off of HBO).

It wish I could say the same for MAD Magazine. It’s still around today, but a shadow of its former self and not nearly as subversive as it was during its golden age, when its circulation was in the millions. It’s published irregularly now, and most of those wonderful writers and artists from the 70s who made it so great are now retired or dead, replaced by less-subtle folks who appear content to dumb-it-down for what’s left of its tween crowd. MAD is no longer the rite of passage to used to be, no longer that first step into a larger world for impressionable young boys, most of whom are now more enamored with their XBox than the black and white pages which so-amused their dads on a monthly basis.

An old article, I see, but it struck a chord - I've got a few years on you, and in 1972 I was still reading MAD regularly. I then saw my first National Lampoon, which featured a parody of MAD, playing it up as out of touch, playing it safe, and just juvenile. I considered it a cheap shot from some upstart rag, but I had also just seen A Clockwork Orange, finding it challenging if a bit hard to watch. I then read the MAD parody, which degenerated into one throw-up joke after another and thought "yeah, the Lampoon does have a point..."