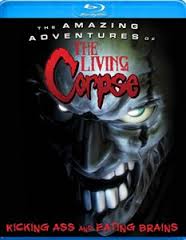 This CG animated horror/fantasy is adapted from a comic book by Dynamite Publishing. I know almost nothing about the comic, but as a film, The Amazing Adventures of the Living Corpse is a real hit-or-miss affair. It begins promisingly, but becomes increasingly disjointed, confusing and repetitive.

The concept is actually pretty cool…a corpse with a conscience, a trait which comes out after he kills his wife and daughter during a zombie outbreak, ends up sparing his remaining son, Taylor. After the attack, Taylor is sent to a boarding school, while The Living Corpse (he’s never named) ends up in some kind of gothic underworld, where’s he’s given guidance and advice from Asteroth, a fallen angel, and a cheerfully-repulsive critter named Worthless Merk (the closest thing we get to comic relief). This place has many doors leading back up to the real world, and The Living Corpse uses them to try and save his son.

At this point, however, the film starts to turn schizoid. Monstrous new characters are introduced with nearly no explanation, as are several out-of-the-blue plot developments (mostly involving the increasingly loony Dr. Brainchild). The story begins to jump all over the place, and I felt like a lot of what I was watching probably made a lot more sense within the context of the comic. Here, it looks like writer/director Justin Paul Ritter was content to touch on the highlights and leave it to the comic’s fans to fill in the blanks.

The CG animation, which mostly resembles a video game, runs hot & cold and takes some getting used to. The various creatures are imaginatively rendered, but the human characters are robotic & bland, like those from a Barbie video. The action scenes are often impressive (it’s fun watching Living Corpse kick ass), though the fighting becomes a tad repetitive after awhile.

The Amazing Adventures of the Living Corpse isn’t a bad film, but fans of the comic are likely to get more out of it than someone coming in cold. Contrary to its R rating (and its brain-munching protagonist), the violence and language are fairly tame for the genre, though the film is definitely not family viewing.