BEYOND THE DOOR: An Italian Horror History Lesson 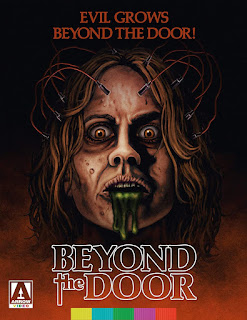 So began the original TV spot for Beyond the Door, which showed possessed, yellow-eyed Juliet Mills growling like a death metal singer and levitating across a room. Being 11 years old at the time, that shit freaked me out, as did the chilling artwork of the movie poster and newspaper ads. This was the only movie that ever made me afraid to turn off the lights without actually having seen it. Regardless of one’s ultimate opinion of the film itself, the ad campaign was indisputably brilliant and all that promotional material – including a replica of the original U.S. poster – is included with this disc.

What I didn’t know at the time was that no blockbuster has ever been made that the Italians couldn’t knock-off faster and cheaper, Beyond the Door being one of the more notorious examples. Warner Brothers famously - and successfully - sued its producers for ripping off The Exorcist. While Beyond unquestionably cops a lot of The Exorcist’s moves, whether or not it constitutes actual copyright infringement is certainly an interesting debate that makes the film well worth revisiting four decades later.

Beyond the Door’s entire tumultuous history – before, during and after – is a story unto itself, which this set explores through an abundance of supplemental material that’s as revealing as it is entertaining. As we learn through dozens of interviews, not everybody involved with the film consider it a rip-off, nor do some historians. A few of their arguments sound like bullshit, but others have genuine merit. The best bonus is a new feature-length documentary, “Italy Possessed,” which chronicles Italy’s dubious history of post-Exorcist “devil” pictures. Beyond the Door was simply one of them, but being the best-produced and most internationally successful, it got the most attention (both good and bad). 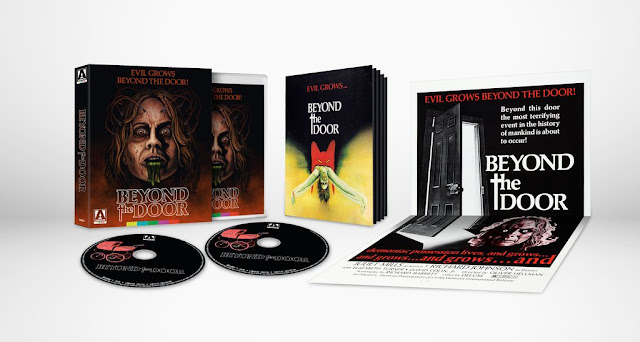 Revisiting the movie itself all these years later was a nostalgic blast, especially with Arrow Video’s nifty 2K facelift. Few have ever mistaken Beyond the Door for a great film and some of its goofier aspects remain highly amusing, such as the funky score, the recurring appearance of pea soup cans, the protagonists’ bizarre children (enhanced by daffy dubbing) and the piéce de résistance, the truly WTF moment when one poor bastard is tormented by a street musician playing a flute with his nose.

A second look also reveals some elements of the film that are genuinely impressive. Mills’ performance is actually quite good, especially in sequences where she’s required to shift back and forth between terrified and demonically-possessed. And despite lacking the budget William Friedkin was afforded, the specially effects aren’t bad. In fact, one particular scene involving Mills’ wandering eye is creepy as hell, even by today's standards. Sure, some scenes are clearly inspired by The Exorcist, but I’d argue the overall narrative pilfers Rosemary’s Baby more than anything else.

Whether one considers Beyond the Door a terrifying treasure, crazy campfest or ridiculous rip-off, this is a beautifully-packaged set with considerable historical importance for horror buffs. It's a fascinating, in-depth look at both the film and the opportunistic Italian auteurs who briefly started a movement, therefore a must-own.

When it arrived, the first thing I did was pop-in disc one to relive the original TV spot that once gave me nightmares. Of course, it's a bit silly and quaint now. On the other hand, when I suggested the accompanying poster would look good in the Dave Cave, my wife quickly & calmly shot-back, "No fucking way." Either she's a coward, her hubby has no sense of decor or some of Beyond the Door's imagery is still unnerving. Probably all three.

MEE-OW! LIKE TAUNTING A MOUSE TO DEATH.
Posted by D.M. Anderson at 5:59 PM