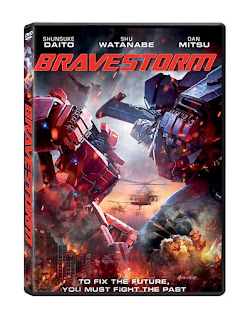 BRAVESTORM on DVD and VOD 4/7
In the year 2050, mankind is extinct on Earth. The last survivors, five Kasuga brothers, must use a time machine to travel back to the 2018, to collect a human capable of exterminating a group of giant robots sent to Earth by an alien race called the Killgis. Filled with massive action set pieces, robot battles, time travel, and tons of other sci-fi goodies, Bravestorm will have you on the edge of your seat from start to finish! A cinematic remake of two 1970s Japanese TV series (“Silver Mask” and “Super Robot RedBaron”), BraveStorm is being distributed by Distribution Solutions / Alliance Entertainment and GVN Distribution.
-------------------------------------------------------------- 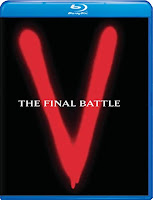 V: THE FINAL BATTLE on Blu-ray 4/14
Is there life out there? Finally, we know. Because they are here. Alien spacecraft with humanlike passengers have come to Earth. They say they come in peace for food and water. The water they find in our reservoirs. The food they find walking about everywhere on two legs. That saga that began with V now culminates in a struggle to save the world in V: The Final Battle. Sci-fi film stalwarts Marc Singer, Robert Englund and Michael Ironside head a large cast in this tense adventure that leaps from the stunning revelation of reptilian beings concealed by human masks to the birth of the first human/alien child to the harrowing countdown to nuclear doomsday. The future begins or ends here.
-------------------------------------------------------------- 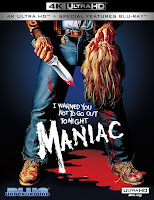 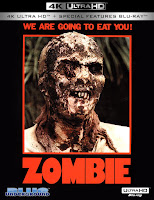 ZOMBIE and MANIAC on 4K UHD Blu-ray 5/26
Blue Underground is proud to present critically acclaimed restorations of ZOMBIE and MANIAC in true 4K Ultra High Definition with Dolby Vision HDR and a new Dolby Atmos audio mix, bursting at the seams with hours of new and archival extras. "We put a lot of time and work into restoring films like MANIAC and ZOMBIE," said William Lustig, President of Blue Underground. " We're thrilled that fans can now view them at home in true 4K Ultra HD, with Dolby Vision High Dynamic Range and new Dolby Atmos audio mixes."
Posted by D.M. Anderson at 8:14 PM