Revisiting THE ISLAND OF DR. MOREAU 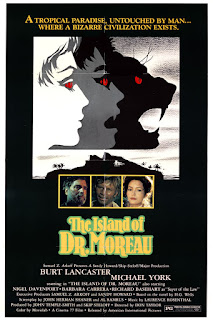 You'll have to indulge me while I give The Island of Dr. Moreau a bit more praise than it might actually warrant.

When I was a kid, my parents used to drop me off at the Southgate Quad nearly every Saturday afternoon. I went alone most of the time, which was actually preferable. For me, going to the movies wasn't really a social activity. Never too picky over what was playing, I simply loved the experience. Those afternoons in the dark, just me, my popcorn and the wonders on the screen, are some of my favorite childhood memories.

One of those memories is of 1977's The Island of Dr. Moreau.

Back then, legendary purveyors of drive-in fodder, American-International Pictures (AIP), took a few fleeting stabs at escaping its B movie origins in favor of mainstream respectability. They opened their wallets a bit wider than usual for such films as The Amityville Horror, Meteor and Force 10 from Navarone. With The Island of Dr. Moreau, AIP continued cashing-in on H.G. Wells' name, albeit on a much bigger budget than the studio's other campy crapfests, Food of the Gods and Empire of the Ants, released around the same time.

But I didn't know any of this in 1977. All I really knew was it had that British dude from Logan's Run (Michael York), the old guy from Airport (Burt Lancaster) and the beautiful Barbara Carrera as Maria, who I'd never seen before but...mee-ow! Though the film is rated PG, my 13-year-old self found her brief seduction scene rather...uh, stirring.

Elsewhere, Dr. Moreau (Lancaster) is a brilliant-yet-bonkers scientist who has retreated to a remote island to continue his controversial work, which consists of using a serum to slowly convert animals into thinking and speaking human beings. Also populating the island are the results of his experiments in various stages of human development. Moreau treats them cruelly, much to the chagrin of Braddock (York), who's marooned on the island and forced to endure the doctor's increasingly maniacal behavior (made more tolerable, to be sure, by Maria's company at night). Moreau ultimately tries to turn Braddock into an animal and document his decent into savagery.

I hadn't watched The Island of Dr. Moreau since that summer afternoon at the Southgate. Back then, I found it entertaining, though nothing remarkable from any kid-friendly horror fare I enjoyed on other weekends. Still, I recently found it on disc - cheap - and fired it up with nostalgic giddiness...alone in the dark just like 40 years ago, this time from the comfort of my Dave Cave rather than the Southgate's sticky floors and cheesy orange curtains.

Four decades later, the film holds up pretty well. Though trying to run with the Hollywood big boys ultimately exacerbated AIP's downfall, it's hard to argue with the results here, which reflect a considerable amount of creative ambition. The Island of Dr. Moreau is arguably the most handsomely-produced movie of the studio's "mainstream" era, directed with workmanlike proficiency by Don Taylor (who'd also make Omen II better than it had a right to be). And even though films like The Howling would come along a few years later to make Dr. Moreau's make-up designs seem quaint, they serve their purpose effectively enough.

The overall performances are quite good as well. York is solid, though for me he'll always be that Logan's Run dude, while Carrera was a reminder of my good taste in boyhood crushes. Perhaps because of his more beloved legendary roles, we tend to forget Burt Lancaster was quite adept at playing characters who are just a little south of sanity (Seven Days in May and the woefully underappreciated Twilight's Last Gleaming immediately come to mind). He's at his unhinged best as the film's titular character.

The Island of Dr. Moreau is a wonderful blast from my past. A definite childhood artifact, the film isn't what anyone would ever call a classic, so its appeal will probably be limited to similarly nostalgic fans. Still, age notwithstanding, it's remains the best of AIP’s adaptations of Wells' novel, and immeasurably more enjoyable than the dumpster fire remake with Marlon Brando.
Posted by D.M. Anderson at 1:53 PM