A TALE OF TWO SNIPES 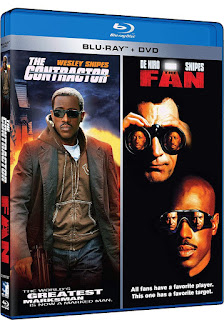 This double-feature collection is a tale of two Snipes.

The first one pops up in The Fan, an in-your-face Tony Scott-directed thriller made at a time when Wesley Snipes was still an A-lister and willing to demonstrate his versatility in a variety of roles and genres. He plays Bobby Rayburn, a pro ballplayer who’s worshipped by dangerously-obsessive fan Gil Renard (Robert De Niro). When Bobby’s batting average tanks, Gil goes to extremes to try and break him out of his slump, including kidnapping and murder.

Snipes is decent, but struggles to keep up with De Niro’s indubitable brand of scenery chewing. As Gil, he makes Travis Bickle seem downright catatonic, blustering his way through a series of confrontations that are both campy and uncomfortable, every scene given an additional caffeine jolt by Scott’s visual chest-thumping. Subtle, it ain’t.

Speaking of Tony Scott – the Michael Bay of his day – it looks like director Josef Rusnak took a few cues from the master for his own action opus, The Contractor. Hyperactive camerawork and seizure-inducing quick-cuts are here in abundance, even for scenes that don’t really need them. This one features the second Snipes, content to grunt and glower his way through a plethora of direct-to-video potboilers.

In this one, he plays James Dial, a former CIA assassin recruited for just one more job: take-out a terrorist currently in custody in London. However, the hit doesn’t go quite as planned. Now he’s being hunted by both Inspector Ballard (Lena Headey) and Dial’s own boss, Jeremy Collins (Ralph Brown), who fears being exposed in Washington for using CIA operatives as hitmen. Dial gets unexpected assistance from plucky 12-year-old Emily, suggesting Rusnak might also be a fan of Luc Besson.

Though narratively and stylistically derivative, The Contractor is fairly enjoyable, with a better cast than your usual direct-to-video thriller. The Fan is bigger and flashier, but sometimes tough sledding. De Niro may have done his job a bit too well, making Gil Renard so irredeemably abhorrent that he isn’t much fun to be around.