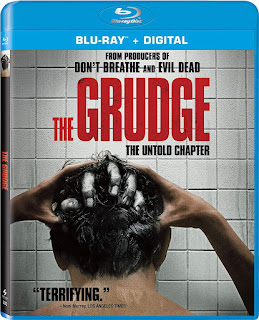 I was never that enamored with 2004’s The Grudge, mostly because it felt pretty derivative of The Ring, as did all the other remakes Hollywood cranked out during its brief infatuation with J-horror. So my expectations for this belated fourth entry in the franchise weren’t exactly lofty.

Maybe that’s why I kind-of enjoyed it.

Despite the identical title, this isn’t a remake, nor is it exactly a sequel. The Grudge is more like a spin-off with a prologue that has an American nurse quitting her job at the same Tokyo house from the first film, unknowingly bringing the curse back home with her. A few years later, an investigation by the recently-widowed Detective Muldoon (Andrea Riseborough) loosely works as a framing device for the film to tell three concurrent stories. All of them involve poor bastards unfortunate enough to have ventured into a suburban house where the titular demon has taken residence. Like a virus, once someone is exposed, the little Grudgling follows, along with a variety of violent pleasantries.

None of it is particularly original, nor are there a ton of surprises. However, The Grudge makes nice use of its non-linear narrative to show how the characters from each “story” are ultimately linked. It also features a strong cast that includes a variety of familiar character actors, such as John Cho, Demián Bichir, William Sadler, Frankie Faison and everyone’s favorite senior scream queen, Lin Shaye. Finally, the film more-than-earns its R-rating with some nasty bits of bone-breaking, blood-spattering violence (though I could have done without seeing a child murdered by her own mother).

The Grudge isn’t a great film. A reasonable argument could be made that it isn’t even a good one. But since I was expecting neither, it was certainly watchable enough. While bringing nothing new to the franchise (or horror, in general), the film is efficiently assembled and doesn’t water-down the mayhem for the mallrat crowd.