THE AMITYVILLE HORROR and the Big Bamboozle 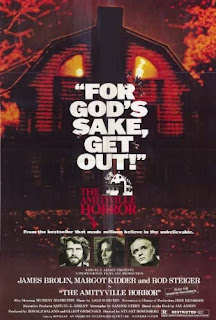 For a brief time in the late 70s, the Lutz family was a household name. Their terrifying account of spending a month in their demon-infested new home was the subject of Jay Anson’s book, The Amityville Horror, which scared the living shit out of damn-near everyone and became a literary phenomenon similar to The Da Vinci Code…the book everyone just had to read. While not particularly well-written, what made it truly terrifying was, unlike The Shining or The Exorcist, we were duped into believing the Lutz’ story was true.

Naturally, Hollywood came calling and The Amityville Horror was adapted into a film in 1979 by American-International Pictures (one of their few big-budget attempts to compete with the major studios). Having just read a copy of the tattered paperback that was making the rounds at my high school – resulting in a sleepless night or two – I just had to check it out, as did everyone else who read it because the Southgate Quad was packed on opening night. Before the lights went down, I overheard others talking-up the scariest sections of the book with anticipation in their voices. Even the friend I came to the movie with – who’d usually rather be caught masturbating than reading a book – said he nearly pissed himself at the part describing a pair of hellish red eyes peering through the Lutz’ bedroom window. Whether The Amityville Horror was true or not, surely the movie would be scary as fuck. 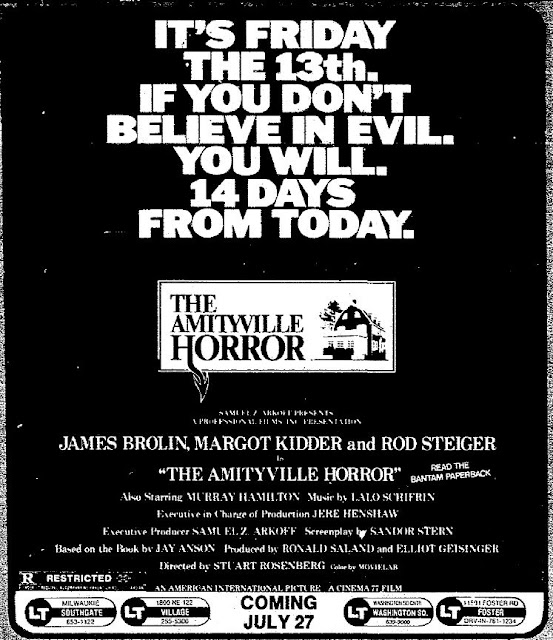 James Brolin & Margot Kidder play George & Kathy Lutz, who learn the hard way how they got their new home so cheap: the last family who lived there were all murdered. Worse yet, the evil which possessed one of the sons to commit this horrible act is still in the house and they don’t like the Lutz' presence one damn bit. Like the book, The Amityville Horror isn’t particularly well-made. Unlike the book, it isn’t particularly scary, either. Those demonic red eyes that practically jumped from the printed page looked more like lights from a couple of smoke alarms. American-International may have opened their wallets a bit wider for this one, but everything still looked kinda cheap. The film also made enough wholesale changes to the story – even condensing the timeline – to suggest the filmmakers were not among its believers. At the showing I attended, no one screamed, jumped or gasped, though I did hear a few chuckles.

Still, for a movie driven more by profit than passion, The Amityville Horror was kind of fun, once I accepted that fact it wouldn't depict the book’s most terrifying moments as vividly as my imagination once did. And in director Stuart Rosenberg’s defense, Stanley Kubrick couldn’t do it with The Shining either. Like Meteor and The Island of Dr. Moreau, it was ultimately another AIP B-movie dolled-up with A-list talent. Sure, the whole thing was cheesy trash, but at least it wasn’t boring and Rod Steiger’s histrionic turn as a terrified priest was comedy gold.

In ensuing years, the Lutz’ story has pretty-much been declared total bullshit, but that didn’t stop The Amityville Horror from spawning a franchise that still has brand name value four decades later, with 23 (and counting!) films that have Amityville in the title. Today, the original film is held in fairly high regard by horror fans who were around back then, probably more out of nostalgia than any actual terror they might have felt. It's amusing to recall how easily bamboozled we were.
Posted by D.M. Anderson at 8:52 PM

all trigonometry formulas Thanks for the informative and helpful post