SHOOTING THE MAFIA Through Letizia's Lens 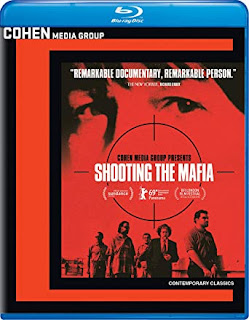 Letizia Battaglia is a free-spirited (to say the least) photographer who began her chosen profession relatively late in life. She approached her craft as an artist, finding a niche capturing the violent activities of the Italian mob. Considering her subject of choice, it’s kind-of amazing she wasn’t whacked.

Shooting the Mafia is both a biography of Letizia and chronicle of the Sicilian mob’s far-reaching power as documented by her camera and video footage over the course of a few decades. Some of the imagery is disturbing enough to be right at home in a Faces of Death video, but undeniably fascinating. Through her lens, we also learn of a few elusive mafia kingpins’ nefarious influence on society and the government, as well as their eventual downfalls.

Less interesting are the segments focusing on Letizia’s personal life, often dramatized by scenes from old Italian movies. Her escape from an abusive marriage and struggle to earn respect in a male-dominated field is somewhat inspiring. However, I didn’t really care what assorted ex-lovers had to say – even if most of them were colleagues - and her other pursuits aren’t nearly as compelling as the violent images she’s famous for. While Letizia’s frankness is admirable, she comes across as somewhat self-absorbed (even abandoning her own kids), which might make it difficult for some viewers to completely empathize with her.

When focusing on Letizia’s specialty, however, Shooting the Mafia has considerable visceral power, telling a story that certainly strips away the mystique and romanticism associated with mob life. But be forewarned, most of the photos and video footage – some involving innocent children – is tough to watch.