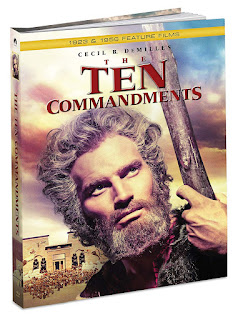 This is a first, folks…

Not that The Ten Commandments is on Blu-ray. It’s been widely available for some time with the same bonus features (including Cecil B. DeMille’s 1923 silent version). This particular 3-disc edition is a nicely-packaged Digibook with a colorful supplemental booklet.

But for the first time, I’m forced to watch it on a day other than Easter. It’s a sacrifice I’m willing to make for you, dear reader, who may be thinking about finally adding this classic to your Blu-ray collection. Don’t fret for me, though. I’ll probably still indulge in some Moses this Easter because the movie's so goddamn epic.

For as long as I can remember, I've sat down after Mom’s (then my wife’s) holiday ham dinner to watch The Ten Commandments. I'm not sure when that started...maybe as far back as 1973 when ABC began the tradition of airing it every Easter Sunday. For me, the holiday just wasn't complete without capping it off with a heaping helping of Hebrew heroics.

I'm almost ashamed to admit that nearly everything I know about The Bible I learned from The Omen, Iron Maiden lyrics and this movie. I suppose that's all the churchin' I need since it's gotten me this far. Even then, can't all ten commandments be just as effectively summed up with "Don't be an asshole?"

But I don't watch The Ten Commandments every year to reaffirm my faith or remind myself of God's laws. I watch because I've always loved Charlton Heston. Growing up on films like this, Planet of the Apes and The Omega Man, Chuck was my definition of badass. Ditto Yul Brynner, so it's always awesome to see these two square off. I also watch because Yvonne DeCarlo and Anne Baxter are smoking hot in this movie; every year, I'm almost positive I can see Baxter's naughty bits under that nearly-transparent Egyptian gown. I watch because Hollywood horndog John Derek is not only hypnotically awful, it's an amusing reminder that his ultimate legacy would be directing future fourth wife Bo Derek (born when The Ten Commandments was released!) in a batch of soft-core sex films.

But mostly, I watch because the whole thing is absolutely epic in every sense of the word. The story is epic, the special effects are epic, the characters & costumes are epic. Hell, every single line of dialogue is epic, belted out by a cast that's...well, epic. Whether or not The Ten Commandments qualifies as a great film is certainly debatable (there is a lot of overacting and heavy-handed sermonizing), but it's unarguably Hollywood storytelling on the grandest of scales. As such, the film remains irresistible.

But watching it for the first time on Blu-ray – which looks infinitely better than my antiquated DVD – has prompted a few nagging questions...

First, why is Easter the only day I ever feel compelled to watch The Ten Commandments? If I love a film that much, isn't anytime a good time? Still, during the other 364 days of the year, it always sat on the shelf next to my Holiday Fireplace disc, not giving the film a single thought until Easter rolls around again. Have I been so conditioned by ABC over the years that, even in this day & age of being able to watch virtually any movie ever made with the touch of a button, I'm powerless to make a different viewing decision on that particular day?

Second, why The Ten Commandments? I may know almost nothing about the Book of Exodus beyond what Hollywood has told me, but I'm pretty damn certain the Resurrection is conspicuously absent. Why not Ben-Hur? Or The Robe? Or even The Passion of the Christ? At least those are somewhat related to Jesus and the crucifixion, though you’d have to be one masochistic sumbitch to enjoy The Passion on Easter. Really, the story of Moses has as much to do with Easter as Happy Gilmore.

But, hey, that’s okay: a religious holiday, a movie featuring God. Yeah, that'll work. And after today, I’ll probably revert back to making the film an annual holiday tradition because, conditioned or not, it just ain't Easter without The Ten Commandments. This Blu-ray transfer is outstanding and if you don’t already own a previous edition, here’s a relatively cheap way to not-only get the best possible picture and sound, but skip 80 minutes of commercials on ABC.

EXTRA KIBBLES
THE TEN COMMANDMENTS (1923) – DeMille’s first stab at the story. Considering when it was made, the first hour remains a technical triumph, but in this writer’s opinion, you can shut it off once the narrative shifts to the present day. (136 min).
"THE TEN COMMANDMENTS: MAKING MIRACLES” - Feature-length retrospective making-of documentary from 2011 featuring interviews with historians, authors, the sons & daughter of DeMille, Heston & composer Elmer Bernstein. Heston and Bernstein are also featured in archival interviews from 2002. All-in-all, an affectionate tribute.
AUDIO COMMENTARY – For both films, by author Katherine Orrison.
NEWSREEL – 1956 New York premiere.
PHOTO GALLERIES - For both films.
TRAILER – 1956 film
HAND-TINTED FOOTAGE – Semi-colorized scenes from the 1923 film.
SUPPLEMENTAL BOOKLET – Not a lot of comprehensive text, but plenty of photos.

MEE-OW! LIKE TAUNTING A MOUSE TO DEATH.
Posted by D.M. Anderson at 6:24 PM