DOUBLE DRAGON: The Chairman to the Rescue 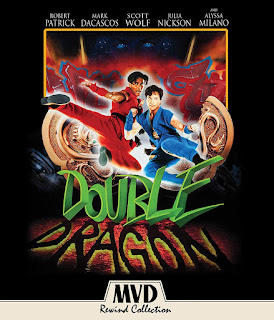 1994's Double Dragon is tacky, cheesy, badly acted and a strong contender for the most "80s" movie that never came out in that decade. From the cast of B-list actors to the prerequisite synthesizer soundtrack, it is, of course, a perfect film for MVD's ongoing Rewind Collection.

This Blu-ray release is also another instance where the bonus features are far more entertaining than the movie itself. MVD has really outdone themselves on this one. The vintage material is like stepping back in time, but the real jewel is a brand new, feature-length retrospective documentary. Revealing, comprehensive and sometimes very funny, it tells a compelling story in its own right, especially since the finished product wasn't quite what anyone had in-mind.

As for that finished product, Double Dragon was of the first films ever based on a video game, and if you think video game adaptations are bad now, this one might redefine the word for you.

But is it fun? Even at its own expense? Yeah, kind-of. If your childhood weekends were spent stalking the aisles of Blockbuster, you might have plucked this from the shelf on your way to the rental counter. As such, there's some nostalgic value here. It's always enjoyable to have a good chuckle at what used to pass for awesome when you were little.

For everyone else, the fun will probably begin to wear off after about 30 minutes. One would think an unholy mash-up of martial arts movies, Escape from New York, The Karate Kid and Willy Wonka's chocolate factory couldn't miss. But while Double Dragon is certainly bad, it's not so ineptly made that it descends into so-bad-it's-good territory. Considering the budget, the movie is technically pretty competent. In a way, that ultimately makes it more of a chore to endure.

Furthermore, something kept gnawing at me while watching. One of the fighting Lee brothers, Mark Dacascos, looked really familiar, but I couldn't place where I'd seen him before. It wasn't until I checked iMDB that I discovered he went on to become "The Chairman" on Iron Chef (my favorite part of the show). I wonder how Mark would have reacted back then if he were told his greatest claim to fame would be screaming "Allez Cuisine!" at the beginning of every episode.

As for the rest of the cast, Robert Patrick and his hair come-off best, while Alyssa Milano demonstrates why Commando was the high-point of her movie career.

Whether or not one shares my assessment of the movie itself, I think anybody with an interest in the filmmaking process (including the business side) still might want to pick this one up. Double Dragon is an archaic and asinine product of its time, but the story behind it - told by those who lived it - is fascinating.

NOT BAD...FOR THE BONUS FEATURES ALONE.
Posted by D.M. Anderson at 8:47 PM