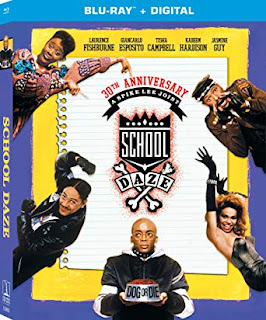 AVAILABLE ON BLU-RAY FROM SONY

One of my favorite movies of all time is School Daze. Written and directed by Spike Lee, this musical-comedy is about conflicts during homecoming weekend at Mission College, a historically black institution in Maryland (though the school itself is fictional).

Vaughn "Dap" Dunlap (Laurence Fishburne) is a student who is an activist and wants to change the protest issues going on at the college. Lee himself plays Half-Pint, Dap's younger cousin who's bent on getting into the most popular fraternity on campus, which is run by Julian (Giancarlo Esposito). The predominantly African-American ensemble cast features many rising stars and familiar faces, including Kadeem Hardison, Tisha Campbell-Martin, Joe Seneca, Bill Nunn and Ossie Davis.

Thirty years later, I still love this movie. I was 12 years old when it was first released, when TV shows like the Cosby Show and a Different World showed what being black was really like and introduced the world to historically black colleges and the social norms of the African-American community. Though the film is fictional, it really inspired many in the black community to become more socially involved. And on a personal note, it also encouraged me to go to college.

Finally available on Blu-ray, School Daze remains one of Spike Lee's best, most entertaining films. Its message of the need for social change, not only in the black community but also the country, resonates even in today’s cultural climate.

MEE-OW! LIKE BEING TURNED LOOSE IN A BIRD SANCTUARY
Posted by D.M. Anderson at 9:23 PM