BOHEMIAN RHAPSODY on Digital 1/22 and 4K UHD, Blu-ray & DVD 2/12
Celebrate the iconic and heart pounding music of Queen and Freddie Mercury with the highest-grossing biopic of all-time when Bohemian Rhapsody comes to Digital and Movies Anywhere January 22 and 4K Ultra HD, Blu-ray™ and DVD February 12. Fans can experience the story behind the band and the making of “Bohemian Rhapsody,” the #1 streamed song of the 20th century and other favorites like “We Will Rock You,” “Somebody to Love,” “We are the Champions” and more, for a music adventure that will make you laugh, sing, dance and cry.

WATERWORLD Limited Edition Blu-ray 1/22
This dystopian tale about Earth being completely submerged in water was notorious for being the most expensive film ever made at the time of its release and wasn't well received by critics. Time has been much kinder to the film, having since developed a cult following as an action spectacle that isn't to be missed. This new release features a 4K restoration and three cuts of the film, including the extended US TV cut that runs 40 minutes longer than the theatrical release. 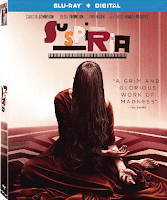 SUSPIRIA on Digital 1/15 and Blu-ray 1/29
Experience Luca Gudagnino’s outrageously twisted re-imagining of Dario Argento’s 1977 horror cult classic that has been called a “grim and glorious work of madness” (IndieWire, David Ehrlich) when Suspiria arrives on Digital January 15 and on Blu-ray™ (plus Digital) January 29 from Lionsgate. Starring Dakota Johnson, Oscar winner and Golden Globe nominee Tilda Swinton (2007, Michael Clayton, Best Supporting Actress; 2012, We Need to Talk About Kevin, Best Performance by an Actress in a Motion Picture - Drama), Mia Goth, and Chloë Grace Moretz and featuring a mesmerizing haunting score by Thom Yorke, Guadagnino’s directorial follow-up to the Oscar-winning Call Me by Your Name (Best Adapted Screenplay, 2017), written for the screen by David Kajganich, has received incredible critical praise with Variety’s Owen Gleiberman calling it a “lavishly cerebral high-end horror film” and a “divinely demonic spectacle of womanly power.”
Posted by D.M. Anderson at 10:09 AM