PICK OF THE LITTER and the Cute Factor 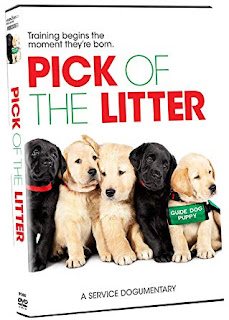 Review by Fluffy the Fearless😺🐶

I have a dysfunctional dog. Sure, I love Murphy, but he's always been an ass. Without getting into specifics, whenever I see the joy others experience with their canine companions, I tend to stare ruefully to the end of the leash at my own pathetic pooch - who acts as though a neighborhood walk is a descent into hell - asking why he can't be like other dogs. Worse yet, the little fleabag has never trusted me, even after ten years.

Well, guess what, Murphy...that trust goes both ways. If I was ever in need of a guide dog, I'm sure you'd lead me right in front of a commuter train.

One thing that Murphy has going for him is he's the cutest dog who ever lived. Don't bother arguing...it's been scientifically proven. He may be a dick, but that Cute Factor has kept him alive through years of tormenting the cats, pissing on furniture and his insistence that regular dog food is beneath him.

Pick of the Litter gets a lot of mileage from the Cute Factor, too. If the presence of puppies turns you to putty, here's a taste of hog heaven (or should I say 'dog' heaven?). But as a documentary - or maybe more accurately, a reality show - it plays a lot like something you'd find on Animal Planet.

The film is about the selection process to find and train guide dogs for the blind. Title cards inform us that only a small percentage of potential service animals make the cut. Five of those dogs - labrador littermates Patriot, Potomac, Primrose, Poppet & Phil - are featured from birth through graduation, a process that takes roughly 18 months. Not every animal will go the distance, and in true reality show fashion, those eliminated get a 'career change' (demotion to regular housepets).


We also meet various trainers who obviously love what they do, yet admit their emotional attachment to these animals makes it difficult to let them go when the time comes, knowing they probably won't see them again. However, after one dog gets cut from the program, the reunion with his former trainer - who suffers from PTSD - provides the film's most heart-tugging moment.

While there's sweetness in abundance, Pick of the Litter doesn't delve much into actual training. As it is, the film is mostly content to fawn over the animals themselves, which is engaging up to a point. Despite their intelligence and congenial natures, none of these dogs have very distinctive personalities, so their individual stories aren't always that compelling. Murphy may be insufferable, but at least he's got character.

Still, the Cute Factor looms large here, which helps immensely since the film plays more like a competition series than a documentary. That'll probably suit many viewers just fine. But considering the incorrigibility of my own dog, I would have liked to see how others are trained to do such remarkable things.