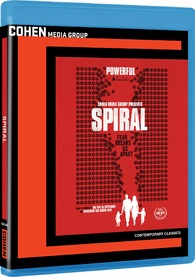 Anyone with even a smattering of empathy should be pissed off that a film like Spiral even exists. But what's truly disheartening is the fact that - given the culture of intolerance and fear-mongering exacerbated by more-than-a-few current world leaders - none of what the film depicts will come as a real surprise.

Director Laura Fairrie focuses on the rise of anti-semitism in France, showing several Jewish individuals and families forced to deal with it. Fearing for their  safety, some have chosen to leave the country - where they've lived their entire lives - while others attempt peaceful means of fighting back against those fanning the flames of open racism. An example of the latter is Julian, a young lawyer who attempts to prosecute Diendonne, a hateful, apathetic "comedian" who's been repeatedly convicted of hate speech and supporting terrorism.

Interviews and profiles are interspersed with footage of recent terror attacks (including the Charlie Hebdo massacre), news stories, racist podcasts and anti-semitic speeches by public figures. There's enough here to anger any judicious viewer. However, the film's structure tends to be a little frustrating, continuously shifting from one subject's plight to another without a lot of transition or context, giving the only glimpses of what they're enduring. We learn relatively little about them beyond their shared heritage.

And I hate to say this, but Spiral isn't incendiary enough to do more than confirm what, unfortunately, most of us already suspect. A more potent & provocative film could have been made from Julian versus Diendonne alone. Julian has compelling personal reasons for his crusade and Diendonne is such a hateful son-of-a-bitch that it's a shame Fairrie doesn't fully-exploit the story opportunities inherent in their conflict.

Still, Spiral does get its intended message out: Anti-semitism is on the rise and getting worse. Despite the efforts of some of its subjects to counter the hatred, we're not left with much optimism that things will improve anytime soon. We definitely walk away angry, but not as shocked and horrified as we should be, which may say more about the state of the world than the film's narrative shortcomings.

EXTRA KIBBLES
"CONVERSATIONS FROM THE QUAD" - An interview with Director Laura Fairrie.