DARK OF THE SUN and Some Personal Baggage 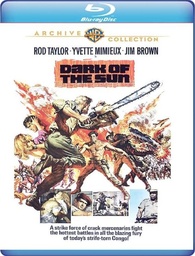 Admittedly, I haven't seen a lot of films on Rod Taylor's résumé. Right or wrong, I generally associate him with romantic comedies, soapy dramas, thrillers and the occasional landmark like The Birds or The Time Machine. He always came across as a congenial, blandly-attractive gentleman, as comfortable modeling suits & ties as he was visiting the distant future. An occasional leading man who sometimes got the girl, Taylor was always a proficient actor, but never personally elevated any movie to greatness.

So for me, Taylor is an odd choice to play grizzled, badass mercenary Bruce Curry in Dark of the Sun, a relatively obscure action film that briefly ruffled some feathers back in 1968 due to its violence. It's much easier to picture a prototypical tough guy like Lee Marvin in a role like this. Taylor doesn't embarrass himself or anything, but my own personal baggage makes it difficult to accept him as a ruthless hired gun.

More convincing is Jim Brown as Ruffo, his sidekick and moral compass as the two accept an offer from a Congo president to retrieve $50 million in diamonds under the guise of a rescue mission. Curry and Ruffo assemble a small group of soldiers to take a train deep into Simba territory, where rebels have been attacking and killing villagers. Along for the mission is washed-up alcoholic Dr. Wreid (Kenneth More), hateful ex-Nazi Capt. Henlein (Peter Carsten) and Claire (Yvette Mimieux), whose husband was murdered by Simbas.

Certainly no cinematic milestone, Dark of the Sun is nevertheless a relatively enjoyable adventure film. Trashy, pulpy and a little exploitative, its violence is comparatively mild 50 years later, though from a narrative perspective, a few (off-screen) deaths still pack a punch. Elsewhere, there's some well-staged action, mostly onboard the train, a truly despicable villain and an unusual score by Jacques Loussier.

Supposedly admired by the likes of Quentin Tarantino and Martin Scorsese, I wouldn't go so far as to call Dark of the Sun a forgotten classic. As a quick & dirty diversion, however, the film has enough enjoyable moments worth discovering, even if I personally don't buy Rod Taylor as an tough guy.