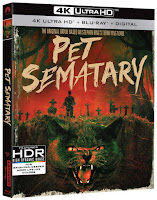 PET SEMATARY: 30TH ANNIVERSARY EDITION on 4K Blu-ray 3/26
Dr. Louis Creed, having just moved to Maine with his wife and two children, is heartbroken when he finds that his daughter's beloved cat has been hit by a truck and killed. Thankfully, a strange, elderly neighbor called Jud knows a secret that may spare the young girl's tears. He takes the dead cat to an ancient Indian burial ground that lies hidden in the surrounding hilltops; and when he buries the feline there, it comes back to life a few days later. But Louis can't be trusted with the secret, and, despite strong warnings that something horrible will happen, he uses the power of the burial ground to bring his son back from the dead. Bonus features include 3 featurettes and audio commentary. From Paramount. 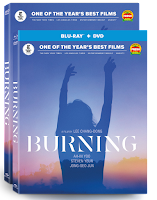 BURNING on Digital January 29, Blu-ray Combo & DVD March 5
One of the year’s most acclaimed films and South Korea’s official entry for Best Foreign Language Film for the 2019 Academy Awards, BURNING debuts on digital January 29 and on Blu-ray Combo Pack and DVD March 5 from Well Go USA Entertainment. Based on the short story "Barn Burning" by Haruki Murakami, BURNING is a psychological tale of all-consuming jealousy that tells the story of three individuals and a mystery that shows no one is truly as they seem. The film is certified fresh on Rotten Tomatoes with an impressive score of 95% and an average score of 8.7 from over 100 outlets. A special bonus is the behind-the-scenes featurette “About the Characters” where viewers will take a deep dive into the characters in BURNING and the actors who portray them. The film stars Steven Yeun (Okja, “The Walking Dead”), Ah-in Yoo (“Six Flying Dragons”) and Jong-seo Jun making her big screen debut. 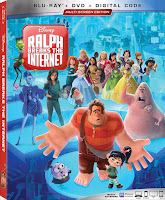 RALPH BREAKS THE INTERNET on Digital 4K Ultra HD 2/12 and 4K Ultra HD & Blu-ray 2/26
Ralph Breaks the Internet arrives home with a wide-range of exclusive extras, taking fans behind the scenes at Walt Disney Animation Studios to explore how artists created the film’s vibrant version of the internet — from comical cat videos to the intense online game Slaughter Race to shady characters on the Dark Net. Features also reveal some Easter eggs — inside jokes and references to other Disney films and characters hidden throughout the film — and filmmakers introduce some never before revealed deleted scenes. 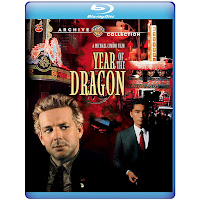 YEAR OF THE DRAGON on Blu-ray 2/19
Corruption. Extortion. Sometimes, even assassination. For the tradition-bound mob bosses of Manhattan's Chinatown, there are age-old ways of running things. And now there s police captain Stanley White s way. Mickey Rourke portrays White, a war veteran who has a Vietnam-sized chip on his shoulder when dealing with an emerging blood feud in Chinatown. John Lone plays the crime lord standing in the line of fire of White's relentless campaign. And Academy Award-winning director Michael Cimino - The Deer Hunter, Thunderbolt and Lightfoot, working from a screenplay based on the novel by Robert Daley (Prince of the City) and coscripted by Oliver Stone, fills the screen with adrenaline rushes of action and excitement. First time on Blu-ray from Warner Archive Collection.
Posted by D.M. Anderson at 1:31 PM