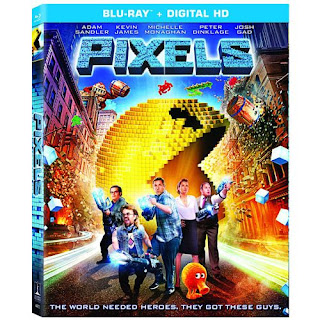 While not a great film, Pixels isn't as terrible as a majority of its reviews suggest. It helps if you keep your expectations fairly low, and since Adam Sandler is arguably the laziest A-list actor since Burt Reynolds in his heyday, that shouldn't be too difficult. If you can manage that, you might even agree this is Sandler's best film in years.

Even so, Pixels is burdened with a checklist of baggage that has ruined most of Sandler's recent films...


On the other hand, the film's concept is fairly amusing (based on a 2010 French short). In 1982, several video gamers participate in a tournament which is filmed, placed in a time capsule and launched into space. Decades later, aliens have interpreted the video as a declaration of war and attack Earth with massive versions of the same video game characters, challenging the world to an apocalyptic showdown. Since the military is helpless, former arcade champion Sam Brenner (Sandler) is recruited by childhood friend-now-president William Cooper (James) to use his gaming expertise to try and combat the threat. Teaming up with them is Brenner’s cocky former rival, Eddie Plant (Peter Dinklage) and Ludlow (Josh Gad), another childhood friend who’s a paranoid conspiracy theorist (with an unhealthy lust for a female game character from his childhood). So yeah...the fate of the world is in the hands of these slackers, kind of like Armageddon with geeks.


The plot bares no scrutiny whatsoever, but plausibility is obviously not the point. As a bit of fond nostalgia, Pixels is kind of fun. Seeing Pac-Man rampaging through the city blocks of New York, pursued by the team in appropriately-colored ‘ghost’ cars with license plates baring their names, is pretty entertaining. The climactic showdown, featuring Donkey Kong (of course), will remind those of a certain age how damn frustrating that game has always been. Overall, the special effects are colorful and elaborate, even though we never truly feel they are occupying the same space as the actors.

Pixels is seldom all that funny, but Peter Dinklage provides some laugh-out-loud moments and steals nearly every scene he’s in (his reward during the resolution is admittedly hilarious). On the other end of the spectrum is Josh Gad in a truly obnoxious, over-the-top performance that’s almost embarrassing to endure.

On a side note, there are some glaring errors which don’t really detract from the film per se, but pop culture nerds will detect in a flash. The so-called time capsule was launched into space in 1982, yet an alien version of Max Headroom makes an appearance, even though he was created in 1984. Similarly, one of Madonna’s MTV appearances is used as a dire warning to Earth, but she wasn’t a media presence until 1983. This is nit-picking, of course, but it does indicate a slap-dash attempt at nostalgia that probably wouldn’t have passed muster in the hands of a more creative writer and director (such as those involved in making Wreck-It Ralph or Who Framed Roger Rabbit).

Still, Pixels is flashy and entertaining enough for what it is, trading-in on brand name familiarity with a high-concept idea that should amuse undemanding viewers, mostly kids, as well as parents who grew up with some of these games. Again, it isn’t a great film, but compared to Sandler’s recent output, Pixels is a masterpiece.