Blu-Ray Review: SOMETIMES THEY COME BACK 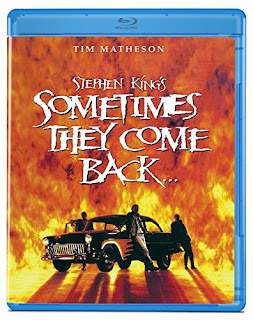 Once upon a time, there was a Hollywood feeding frenzy when damn near every studio and producer greedily snapped-up the rights to virtually everything that belched from Stephen King’s typewriter (you know, those things we used before computers). Even a lot of his short stories, no matter how slight, were being bloated into feature length films by anyone eager to cash in on King‘s name. Most of the short story adaptations were terrible (like The Lawnmower Man, which tossed aside everything from King’s story but the title). A few, however, weren’t too bad, such as Sometimes They Come Back.

Granted, this made-to-TV film is just as guilty of padding the original material to justify its length, but at least the story remains more-or-less intact, in which Tim Matheson plays a troubled teacher who returns to his hometown and is tormented by the same undead punks responsible for his brother’s death years earlier. While this adaptation isn’t particularly scary and never escapes its small screen origins, it’s competently made and features serviceable performances all around. Sure, the same story could have been told a fraction of the time, yet still it manages to maintain viewer interest (no small feat).

Sometimes They Come Back may be a relatively minor entry among the plethora of Stephen King movies we’ve been inundated with over the years, but it’s far from the worst. While ultimately forgettable in the long run, it’s an undemanding and fairly entertaining way to spend a dull evening.