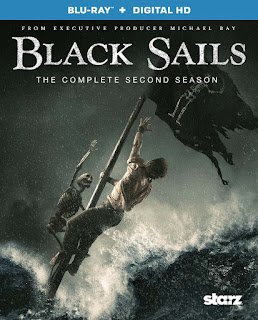 Season Two picks up where Season One left off, with little more than a brief synopsis of previous events that won’t do newcomers any good whatsoever. If you haven’t been keeping up, you’ll be completely lost. Not only that, the quest for Urca gold (the main story of Season One) remains the ongoing plot of this season, further complicated by new characters & conflicts, as well as more double-crosses, betrayals and political ramifications. Despite the increasingly labyrinthine story with almost too many characters to keep track of, much of the focus remains on Captain Flint (Toby Stephens), arguably the show’s most dynamic character. Going the Godfather II route, most early episodes include revealing flashbacks of the incidents which ultimately led to Flint becoming the most feared pirate of the era.


The overall production values of Black Sails remain not-notch, from the elaborate set-design to the visual effects to the seedy dirt & grime permeating its characters and their environment. This arguably remains one of the better looking shows on television. Whether or not this is an authentic depiction of pirate life doesn’t really matter...as viewers, we’re mostly convinced.

But, like Season One, Season Two takes a loooong time to gain momentum. Despite a few scattered moments of violent conflict and decidedly non-erotic sex, the first several episodes are almost maddeningly meandering (especially for viewers thinking the Urca gold plotline should have been wrapped up by now). It isn’t until the fifth episode that we see any real action, the same point where the overall plot truly begins to engage the viewer. As with the first season, patience is a virtue, which is more-or-less rewarded.

NOT BAD...PERHAPS A LITTLE TOO COMPLICATED FOR ITS OWN GOOD.