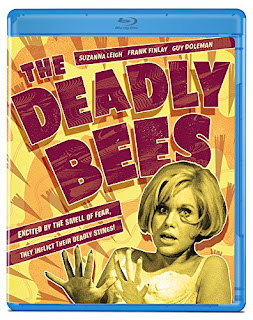 Pity the poor bees. One would think that an insect responsible for more human deaths than every shark to ever stalk the seas would be foolproof horror fodder. But despite decades of trying, we still haven't done them justice onscreen. In fact, you'd be hard-pressed to come up with a killer bee-related title which isn't laughably bad.

Some of this might be the bees' fault. I'm no filmmaker, but I imagine their incorrigible nature makes them as difficult to work with as Marlon Brando. Still, a gifted director can work around a star’s diva-like behavior, like Francis Ford Coppola when Brando showed up on the set of Apocalypse Now a hundred pounds overweight without even bothering to read the script.

Irwin Allen, definitely no Coppola, couldn’t do it though, which is partially why The Swarm remains one of the daffiest disaster movies of all time. Neither could Freddie Francis, who managed to crank out a few cult classics for Amicus and Hammer studios during their 60s & 70s heyday. His 1966 horror film, The Deadly Bees, is arguably the first to depict our pollinating pals as monsters, but hampered by an obvious low budget, a truly WTF screenplay and ludicrous special effects (probably because, like Brando, bees don’t like to do what directors tell them).


Suzanna Leigh plays an exhausted pop star who goes to a remote English village to relax. Two dedicated bee-keepers live there as well, one of which is inexplicably obsessed with using bees to kill his enemies, having developed a liquid concoction which makes them attack anyone wearing the stuff. A few folks die after reacting in horror to repeated footage of swarming bees badly superimposed on the screen. The special effects are hilariously bad, as are the performances and totally out-of-place musical numbers at the beginning of the film (featuring a pre-Rolling Stones Ron Wood!), which is probably why The Deadly Bees was once featured in an old Mystery Science Theater 3000 episode.

In fact, its unintentional camp value is the main reason to watch this film today, which might tickle the funny-bone if you’re in the right frame of mind. It isn’t a mega-budget train-wreck like The Swarm, but The Deadly Bees is still a gloriously goofy experience just begging for verbal abuse while watching. In that context, this is great fun.

NOT BAD...IF BAD IS WHAT YOU'RE LOOKING FOR