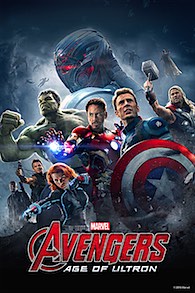 As someone who isn't an obsessive fanboy when it comes to comic book adaptations, movies like Avengers: Age of Ultron are a challenge to review, especially since I'm of the humble opinion that Marvel's every-movie-is-connected mantra is becoming exhausting & tiresome (with no visible end in sight). I've enjoyed many Marvel films and happen to think Captain America is the best superhero franchise since Christopher Nolan's Batman trilogy. At the same time, I have recently become resentful of the conceit that moviegoers need to see every single Marvel film in order to grasp the big picture, lured by the promise of greater things to come.

Case-in-point...the original Avengers was a terrific surprise...assorted superheroes brought together for the ultimate mash-up. Whether or not you actually saw every previous movie leading to this inevitable teaming didn't matter. That film masterfully presented each character in such a way that, even if you never previously took time for Thor, Captain America: The First Avenger or Iron Man, you got the gist. That, more than anything, is arguably why it became the biggest superhero film of all time. If this was the only Marvel movie you ever watched, it was still a complete experience.

So here we are with Avengers: Age of Ultron, the capper to Phase 2 of the Marvel Cinematic Universe which relies much more heavily on the audience's familiarity with, not only the first Avengers, but the individual films released in the interim. If you haven't been keeping up, the very first scene is nothing but a disorienting, hyper-kinetic exercise in pyrotechnics (with surprisingly bad CGI). The film doesn’t stop to remind us what Hydra is, nor the stone in Loki's apprehended scepter, nor the fact S.H.I.E.LD. is currently in shambles, nor the importance of two super-twins first introduced in a post-credit sequence of a previous film. The conceit that everyone is up-to-speed essentially renders much of this movie a mere transitional chapter for those already in the MCU club. The full-speed-ahead attitude of Age of Ultron sometimes works against it’s effectiveness as a film which can stand on its own merits.


Still, despite a rocky opening and a sometimes meandering second act, things improve considerably once it calms itself down to focus on the story, that of a malevolent A.I. empowered by Tony Stark’s engineering skills (not to mention a lot of ego). By now, these characters are like visits from old friends and their interactions with each other is what keeps it going during the duller bits. There are a few new characters as well, most of which are interesting, although some appear to be shoehorned in for the sake of future films. The climax is nearly as rousing as the New York battle from the first film (with the fate of the world at stake, of course), each Avenger getting showcase moments of inimitable ass-kicking and quotable one-liners.

Ultimately, Avengers: Age of Ultron is a film which mostly preaches to the converted, aiming to please the core audience who lap-up everything Marvel has to offer. As such, it’s enormously successful, even if the novelty of seeing all these guys together has worn off just a bit. The casual moviegoer may be at a disadvantage, however, since this train doesn’t really stop to let new passengers onboard.

NOT BAD...HAVING PREVIOUS KNOWLEDGE HELPS CONSIDERABLY
Posted by D.M. Anderson at 7:36 AM