TARANTULA and the Fiery Solution 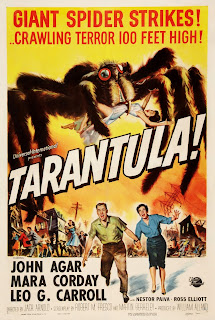 I came across a news story the other day about a guy who pulled into a gas station and discovered a large spider crawling outside his fuel tank. His reaction was to burn the spider with a lighter, apparently forgetting gasoline is just a tad flammable. His car and one of the pumps erupted into flames. Only the quick thinking of an attendant, immediately shutting down all the pumps, prevented the whole incident from destroying a city block.

A few weeks earlier, a lady jumped out of her moving car, which moseyed on it's own for another thousand feet before crossing the meridian and hitting a tree. When later asked why she abandoned her vehicle, the woman said she spotted a large spider in her car and had no choice but to flee. It is unknown whether or not the offending arachnid survived the crash.

Then there was this drunken man who was relaxing in his recliner in front of the TV. Upon spotting a large spider crawling up his leg, he grabbed a nearby handgun and shot it, blowing off half his own foot.

I could go on, and you can Google countless other tales of folks who've burned down their own houses or blown themselves up just to eliminate a spider threat.

What do all these people have in common? If you're like me, where the term 'large spider' means one visible to the naked eye, these guys are superheroes. Most likely intoxicated superheroes, but no-less selfless. Taking one for the team to save us from nature's most unholy creation makes them role models to be emulated. Like Superman, only dumber.

I've always done my part by always using 8,000 times the necessary force required to kill them, usually with a shoe or a book. And I whack them more than once...usually several times to make certain they don't return to torment me in the next life. While I haven't yet resorted to using fire, I did once make the mistake of smashing one with a hammer, leaving a permanent dent in our dining room floor.

Spiders are scary because...well, they're spiders. Aside from the ants in my kitchen, they are the worst animal to ever scurry the planet and exist for the sole purpose of being squashed by a paperback (a good reason not to switch to e-books). If God didn't intend us to kill spiders on sight, he would have made them look more like little bunnies. Instead, spiders are stealthy, silent, hairy, venomous and equipped with more eyes and legs than any creature has a right to own. I'm certain if a spider were to catch its own reflection in a mirror, it would try to squash itself.

In my humble opinion, the only thing preventing Earth from becoming a Utopia is the continual presense of spiders.

And no, I don't give a damn about their so-called positive environmental impact by keeping the insect population in check. We have a bug zappers and Black Flag for that. Besides, what do you think is actually worse for the environment, a few more flies in the house, or the fact I've shit myself enough times whenever encountering any spider larger than a quarter that, somewhere on Earth, there's an Everest-sized mountain of soiled underwear named after me?

Now that I've made my personal arachnophobia apparent, we must discuss 1955's Tarantula, the movie responsible for that initial pair of shit-stained skivvies which would grow to become my carbon footprint on the world. At the behest of one of my less squeamish classmates, I first saw it on a local independent station in the early 70s and spent half the time with my head buried under blankets. This was scary-ass shit, especially since the special effects were totally convincing for the time (and still pretty impressive today). The fact that it’s black & white made everything even scarier. By the way, for those who still doubt the intrinsic power of black & white, try watching The Exorcist without color.


In Tarantula, Professor Gerald Deemer (Leo G. Carroll) seemingly has good intentions, trying to create a super food nutrient that will help feed the world's ever-growing population. Instead, his experiment results in ever-growing lab animals, such as mice, guinea pigs and a tarantula. Apparently intrigued by this side effect, Deemer keeps injecting them...including the fucking tarantula.

Sure, the idea of a dog sized guinea pig has a certain appeal (who wouldn't want to cuddle with one?). But a spider? What exactly would be the possible motivation for bulking-up a creature which already makes the average person shit themselves when they spot one in the shower? Perhaps Deemer was also looking for an effective constipation cure. After all, your bowels could be impacted with a rack of billiard balls, but upon seeing a barn-sized tarantula heading your way, those suckers would shoot from your ass like rounds from an M-16. So Deemer's either totally insane or simply worst person ever.

Whatever the case, it's now up to Dr. Matt Hastings (John Agar) and "Stevie" Clayton (Mara Corday, one of the most gorgeous unsung scream queens of the 50s) to unfuck Deemer’s fuckery. After killing a bunch of farmers and their cattle, the title creature threatens an entire Arizona town. Guns don’t work, nor does dynamite, which I’ve always suspected would be the case when confronting our arachnid adversaries.

As we all know, the only effective solution to getting rid of a spider is total overkill, just to make sure it doesn’t come back twice-as-big and plenty pissed. So when military jet fighters are called in to napalm the shit out of this over-grown critter, are we really concerned about the environment at this point? Hell no! I’d use napalm as a bug bomb in my own house if it meant eradicating even the smallest of the species.

As for a gigantic mutated one? In my humble opinion, Tarantula doesn’t go far enough. Fuck the napalm. Unleash the atomics and nuke that bastard behemoth into oblivion. Sure, the Arizona desert would be a radioactive wasteland for a few decades, but that pales in comparison to the mountain range of soiled underpants blighting the southwestern landscape if any trace of this animal were left.

Despite the utter terror it instilled in me as a child, Tarantula is mostly remembered today for featuring a young Clint Eastwood near the start of his career, unbilled as one of the jet pilots. Never one to forget his friends, Eastwood later included Mara Corday in several films he directed.
Posted by D.M. Anderson at 8:47 PM