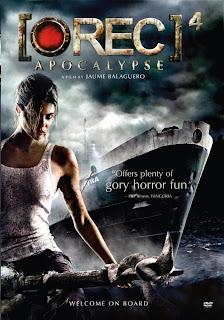 Fans of director Jaume Balaguero's REC series will be happy to know he's back onboard (after skipping the forgettable [REC]3) for this fourth installment. Perhaps the best praise one can give this film is, if you loved the first two films, [REC]4 offers more of the same.

Actually, that's not entirely true. [REC]4 is the first in the series not presented as found footage (which suits me fine because the novelty wore off years ago). The setting is different, as well. Instead of a quarantined apartment building, this one takes place onboard a ship at sea.

However, Manuela Velasco is back from the first two films as reporter Angela Vidal. In fact, [REC]3 is completely ignored as this one picks up where the first sequel left off. Everyone who survived the apartment ordeal (where a blood-born virus turns the people into violent savages) has been rounded up and put onboard a cargo ship run by a team of researchers to find a cure for the deadly virus. Of course, these researchers, headed by the cold-blooded Dr. Ricarte and aided by armed soldiers, underestimate what they’re dealing with. It isn’t long before more poor saps are becoming infected left and right.


As the body count rises, Angela, aided by portly computer geek Nick (Ismael Fritschi, in an amusing performance) and Guzman (Paco Manzanedo), must combat the infected monsters and Dr. Ricarte if they want any chance of getting off the ship alive.

[REC]4 offers the usual amount of blood & guts action typical of the series. On the other hand, the film offers a few new story twists late in the game, and even if they seem more reminiscent of the Alien franchise than 28 Days Later, it’s nice to see there’s still some life left in this franchise. Longtime fans of these films will want to check it out.