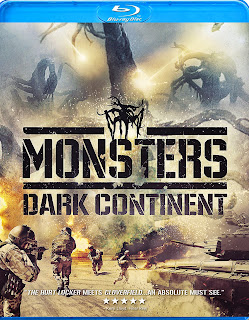 2010's Monsters was pretty impressive for a low budget film, enough for Hollywood to take notice and give director Gareth Edwards the Godzilla gig. But as well made as it was, Monsters wasn't without its detractors. For a film about giant alien beasties wreaking havoc across Mexico, we sure as hell didn't see much of them; the story itself was slow, somber and far more driven by its characters' journey home. If you weren't already onboard with what Edwards was able to accomplish with limited resources, you probably hated it. The inevitable sequel, Monsters: Dark Continent, is likely to be equally polarizing.

Edwards doesn't write or direct this one, but director Tom Green (no, not the Freddy Got Fingered guy) tries for the same vibe. This time, the aliens are running rampant in the Middle East, and we follow a group of newly-recruited young American soldiers as they join the fight to get rid of them. However, American intervention isn't exactly welcome by the indigenous population, mainly because widespread bombings are also destroying villages and killing civilians. This group of soldiers meets more resistance from the locals than the monsters themselves, which, despite their size and numbers, don't appear to be all that threatening or aggressive. In fact, one heard of bison-sized critters they encounter (and kill) might almost be considered cute.


We do see a lot more of the title creatures this time around, and not just brief snippets of tentacles in the dark. As seen on the desert plains in broad daylight, they are colossal, menacing, even somewhat majestic. For a low budget film, the special effects are as impressive as any mega-budget blockbuster you'd care to name. However, they still take a backseat to the human conflicts. Speaking of which, despite earnest attempts to establish each individual character (mostly at the beginning, which includes some pointlessly gratuitous sex scenes), none of them are particularly interesting, so when they start dying or going batshit crazy, we don't really feel much.

At nearly two hours, the film is way too long, with a few stretches which are nearly sleep-inducing. Because of its lack of dynamic characters, the entire first act could have been excised without being missed. However, once we're in the battle zone (with a none-too-subtle commentary questioning our current military involvement in the Middle East), there's at least enough going on to keep us interested. We also begin to develop the unshakable feeling that the aliens themselves aren’t the real monsters, though an apocalyptic final shot suggest they will be the catalyst of our demise.

Like the original film, Monsters: Dark Continent may ultimately end up being more admired than truly enjoyed, depending on how much you appreciate what a filmmaker can accomplish with a limited budget. Whatever the case, you’ve probably sat through far worse sequels.