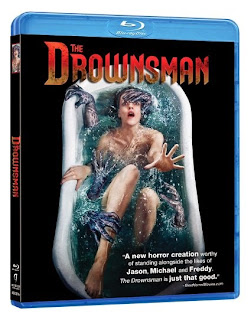 Even though The Drownsman offers nothing new to the horror genre, I kind of enjoyed it. Perhaps it was my frame-of-mind at the time, somewhat weary of all the found-footage fiascoes, CGI ghostfests or the latest zombie-flick-of-the-week I've reviewed lately.

The Drownsman is none of those, yet still doesn't have an original bone in its body. Within a few minutes of watching, it's clear the film's biggest influence is A Nightmare on Elm Street. We have Sebastian Donner, a serial killer who enjoys drowning his female victims. But one of them, Isabelle, turns the tables and drowns him instead. Years later, after nearly drowning herself, Madison (Michelle Mylett) develops severe hydrophobia, much to the chagrin of her friends, who think she's going crazy. However, Madison's fear turns out to be well-founded when Sebastian, through water, returns to claim more victims.


While The Drownsman isn't especially scary, this is a nifty concept which presents its primary villain as sort-of an aquatic Freddy Krueger, reaching out from faucets and washing machines to increase the body count. On paper, this sounds laughable, but director/co-writer Chad Archibald mostly has us buying into the whole thing (at least while we're watching) and includes a few unexpected plot twists during the final act. None of this stands up to much scrutiny, but it's fairly entertaining, with serviceable performances by the entire cast.

I, for one, appreciated sitting down to enjoy an old school boogeyman story that, while totally conventional, didn't insult my intelligence (the story doesn't rely on characters acting stupidly). Sebastian Donner isn't likely to stay in our public consciousness like Jason or Freddy, but he's a serviceable-enough villain to keep us interested.