Blu-Ray Review: IT! THE TERROR FROM BEYOND SPACE 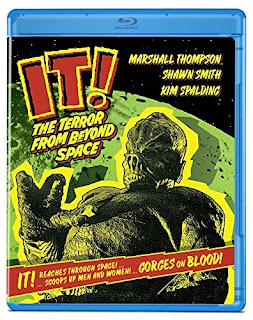 Of course, any sci-fi or horror disciple worth their salt regularly drops to their knees and worships at the alter of Alien. It’s one of the most influential genre films of all time; the list of subsequent movies it has inspired is longer than the Dead Sea Scrolls. Even today, almost 40 years later, countless directors and screenwriters borrow liberally from Ridley Scott’s classic.

But as revered as it is, Alien itself probably wouldn't exist if not for a small, mostly-forgotten film with the exact same premise (and some strikingly-similar scenes) released 21 years earlier. For some of you, this might be like learning God actually gave the world two sons: the charismatic, good-looking messiah we admire and worship, and the prematurely-balding older brother who lacked the same ambition and remained a simple carpenter for the rest of his life. Still, Jesus may have once looked up to his big brother for inspiration and guidance, much like younger siblings generally do when Mom and Dad aren't around.

It! The Terror from Beyond Space is the sci-fi equivalent of that older brother, and Alien fans might be surprised at how much their beloved film steals borrows from this low-budget piece of drive-in fodder. In fact, part of the fun of watching this movie today is discovering the striking similarities between the two. For example:
Okay, so maybe you’re a tad disillusioned that Alien isn’t quite as original as you once thought. Does this mean It! The Terror from Beyond Space a better movie? Of course not. Alien still deserves its status as an all-time classic, yet there’s a lot of fun to be had in checking out this old relic, which is actually pretty entertaining on its own terms. Sure the special effects are archaic, but like Alien, it benefits from low-key performances and smart dialogue, with a story that has since-proven to be timeless.

Any true fan of a particular genre needs to acknowledge and appreciate the older films which make such love possible. While no classic, It! The Terror from Beyond Space deserves a bit of that same love thrown its way, especially since nobody involved with Alien ever did. 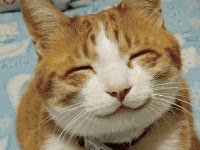 Purr...there's a lot of fun to be had comparing this ol' thing to a modern classic.