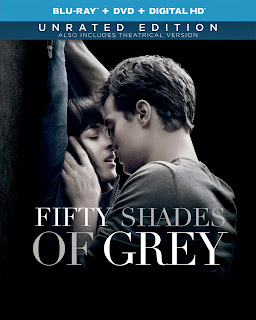 I never read that grammatically-blasphemous piece of mom-porn known as Fifty Shades of Grey (why would I?), but its butchery of standard English is already legendary. The book sold in stupid amounts anyway. So of course Hollywood came a-callin'. And yeah, the movie made stupid amounts of money, too (mostly during its opening weekend). Still, considering the explicitness of the book's BDSM subject matter, I imagine many folks (including fans) may have shied away from the film in theaters. After all, watching people have kinky sex has always been more enjoyable in the comfort of your own home than when surrounded by strangers.

For them, I suppose I need to address the main questions they undoubtedly have regarding this Blu-Ray release:

1) Is the movie as badly-written and unintentionally funny as the book?
Fortunately or unfortunately, the answer is no. Sure, some of the dialogue will illicit a few chuckles, but the movie isn't as stupid as one might assume. Overall, the performances by the entire cast are fairly decent considering the material they have to work with (which is pretty slight). Those expecting high camp will likely be disappointed.

3) So, is it a decent love story?
Not especially, mainly because the main characters are largely uninteresting. Young billionaire Christian Grey (Jamie Dornan) may be sexy and suave, but despite repeatedly defending his penchant for S&M with “It’s how I am,” we never really identify with him. The same goes for Ana (Johnson), initially a college waif (and virgin) who’s quickly sucked into Grey’s world of sexual peculiarities without ever providing the audience a reason why she’d be even remotely aroused by them.

4) I loved the book. Will I be disappointed?
Yes or no, depending on your expectations. You gotta remember this is a film released by a major studio (Universal), so of course the notorious tampon scene ain’t gonna happen, nor any other moment which would push it into NC-17 territory (this also applies to the unrated version available on this disc). On the other hand, the story itself follows the novel pretty closely (albeit perfunctory).

5) So, is it a terrible movie, like most critics said?
Not exactly. As stated before, the performances are decent and the screenplay mostly does-away with author E.L. James’ cringe-worthy prose. I also have to admit that the scene in which Ana & Christian discuss the terms of their Dominant/Submissive contract is pretty damned amusing, which ingeniously morphs into the single truly sexy moment in the entire film.

I watched this with my wife. After it was over, she said it was like watching a dirty Hallmark Channel movie (she’s seen a lot of ‘em, so she‘d know). Her opinion is perhaps the most accurate assessment of Fifty Shades of Grey: If you’re already onboard, you’ll accept the slight characters, shallow attempts at romance and enjoy the added bonus of kinky sex.

If not...why are you still reading this?

Not bad, depending on your expectations
(you may just as easily hate it)
Posted by D.M. Anderson at 5:07 PM