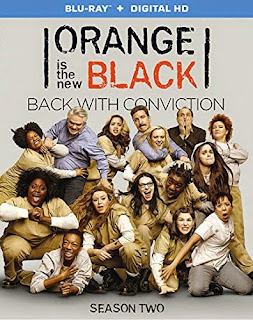 FREE KITTENS MOVIE GUIDE and LIONSGATE are giving away Blu-Ray copies of Orange is the New Black, Season Two.

Nominated for 12 Primetime Emmys and four Golden Globes, the “smart, salty and outrageous” (The New Yorker) smash hit Orange Is the New Black – Season Two arrives on Blu-ray (plus Digital HD), DVD (plus Digital) and Digital HD May 19 from Lionsgate Home Entertainment. Catch up on Season One, now available to own for the first time on Digital HD starting May 19.

Based on the best-selling memoir by Piper Kerman, the hugely popular dark comedy from “Weeds” creator Jenji Kohan is a groundbreaking show and winner of the Best Comedy Series at the Critics’ Choice Awards, as well as Outstanding Performance by an Ensemble in a Comedy at the 2015 Screen Actors Guild Awards.

To enter, simply leave us a message in KITTY KONTACT, located in the sidebar at the top of this page. Winners will be chosen at random.
Posted by D.M. Anderson at 4:46 PM