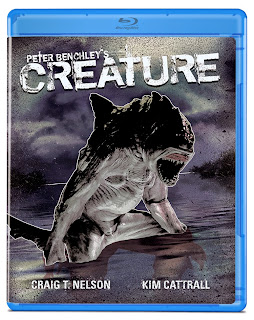 Peter Benchley will always be synonymous with Jaws, of course.

For a long time afterwards, he wrote a variety of other books no one cared about. It wasn't until fairly late in his career that he must have realized he'd never escape the shadow of Jaws. His last two novels, Beast and White Shark, had him revisiting what made him a household name in the first place...sea critters with nasty dispositions. While Beast follows the Jaws formula pretty closely, White Shark ventures into sci-fi territory, involving the military playing around with genetics to create monsters

Once again, Hollywood came calling and both were adapted into television miniseries. White Shark was retitled Creature, which is actually more accurate since the title beast isn't exactly a shark.

A few decades ago, the government tried crossbreeding sharks with other species, including humans, one of which escaped. 25 years later, marine biologist Simon Chase (Craig T. Nelson) is studying sharks near the now-abandoned research facility. He's later joined by ex-wife Amanda (Kim Cattrall) and teenage son Max. Soon, local islanders begin dying. At first everyone blames a pregnant great white lurking around, and inexplicably hold Chase responsible for not telling them about it (A shark in the ocean? This must be YOUR fault!).

But for Chase, the evidence doesn't add up to a shark being the culprit. After a few more locals become lunch, he and Amanda learn about the experiments once conducted at his lab. They contact the Navy, and Admiral Richland (Colm Feore), who was present when the creature first escaped, shows up with a batch of Navy Seals. He intends to kill the creature and destroy all evidence of the old experiments. Meanwhile, the creature begins attacking people on land. Because it's half-shark, half-humanoid, its got arms & legs to go with all those fins and teeth.

At three hours, Creature is way too long for its own good; the same story could have been more economically told in half the time. Speaking of story...since you've read this far, you are obviously open to the outrageous premise. Things get goofy at times, both aided and hampered by the creature's appearance. Created by the great Stan Winston, it's suitably detailed and gruesome when bursting from the sea. However, watching it lumber around on land like the Creature from the Black Lagoon might illicit a chuckle or two.

Still, there's new stuff showing up weekly on SyFy that's far worse. Despite its overlength and occasional silliness, Creature remains pretty entertaining for a made-for-TV movie, with serviceable performances, decent attack scenes and some jackass characters whose violent deaths are well deserved (okay, maybe not the cute little seal). It's not gonna make anyone forget Jaws, but you knew that already.