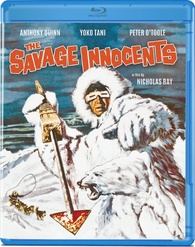 From a historical standpoint, The Savage Innocents is noteworthy for featuring a very young Peter O'Toole in his first substantial role, just before Lawrence of Arabia made him a superstar. He also turns in the best performance in the film.

Additionally, there's some beautiful imagery, the cinematography giving an almost dreamlike quality to its Arctic locations. Aside from a few noticeable visual artifacts early on (most notably during a seal hunting sequence), Olive Films' video transfer is very good. The film's underlying theme - a clash between two distinctly different cultures - is always worth exploring. Unfortunately, The Savage Innocents is a clumsy, schizophrenic exercise in tedium.

Anthony Quinn - looking like an over-aged Monkees' reject - is Inuk, a lonely Eskimo who eventually lands an obedient wife, Asiak, (Yoko Tani) while hunting walruses and seals. After seeing a rifle for the first time - a friend traded for it with white settlers - he ventures to a nearby outpost to try and get one for himself. Unfortunately, because he doesn't understand their customs (and vise versa), Inuk kills a local preacher who refused his offer to spend time with Asiak. Inuk & Asiak are later pursued by two troopers (one of whom is O'Toole).

Don't be fooled by the premise, which is indeed intriguing. Instead, the movie rambles along for over an hour before this threadbare plot begins to unfold. Until then, Inuk is presented as a clumsy, dimwitted rube, played to the hilt by Quinn, who mugs and grunts like he's the comic relief in a beach party movie. There's also some terrible voice-over narration related to Eskimo customs, the kind you might hear in an ancient educational documentary the Mystery Science Theater gang used to riff.

The film hasn't aged well, either. It's depiction of Eskimos may even be considered offensive in this day and age, as demonstrated in an embarrassing scene where Inuk & Asiak get drunk and dance to rock & roll for the first time. The fact we're supposed to laugh at their antics doesn't sit well.

Instead of a culture clash, The Savage Innocents seems more interested in sensationalizing the Eskimos' customs, presenting them as ignorant and barbaric. As movie legends go, this is hardly Anthony Quinn's shining moment. Nor O'Toole's, for that matter, but at least he doesn't embarrass himself. 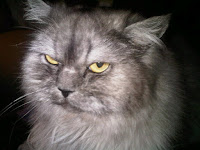