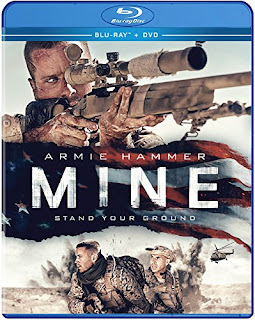 Movies which which primarily feature a single character in a simple-but-perilous predicament are inherently intriguing, though difficult to pull off well. The best ones - The Shallows is a great recent example - are gripping, visceral experiences where the viewer can't help but put themselves in the character's shoes. Others feel too slight and unnecessarily padded out to feature length. Mine falls somewhere in between.

The premise is terrific. Armie Hammer plays Mike Stevens, a marine sniper deployed in Africa to kill a reported terrorist. After the mission fails, he and buddy Tommy Madison (Tom Cullen) must walk across a massive desert on-foot for extraction. Along the way, they stumble into a minefield. Mike steps on one, which will detonate if he lifts his foot. Tommy's not so lucky; his legs are blown off and he eventually kills himself, leaving Mike alone, miles from the nearest village.

He manages to contact his superiors, who inform him they can't come in for a rescue for 52 hours. With almost no water, Mike must remain nearly immobile while fending off nocturnal predators and dealing with the elements (including desert heat and a massive sand storm).

These scenes - Mike alone in the desert, his chances for survival dropping each hour - are fairly gripping. Hammer delivers a suitably gritty performance, effectively conveying both stoicism and desperation. Less effective are numerous flashback scenes, mostly involving his abusive father (Geoff Bell) or his fiancee, Jenny (Annabelle Wallis). While they're obviously meant to provide a bit of background to the character, the overuse of flashbacks is somewhat intrusive, repeatedly sucking the viewer out of Mike's current predicament.

I also could have done without Berber (Clint Dyer), a village local who frequently visits Mike throughout his ordeal. He initially provides Mike with water, but later ends up offering metaphors about life and fate. Seemingly serving as a host for the Mike's hallucinations, the character's actual purpose grows increasingly baffling with each scene.

While there's a good argument that Mine might have been more effective as a short subject, the scenario alone keeps us interested enough to power through the padding and see it through to the end. The film comes to a fairly satisfying - and amusingly ironic - conclusion that more-or-less justifies our time.